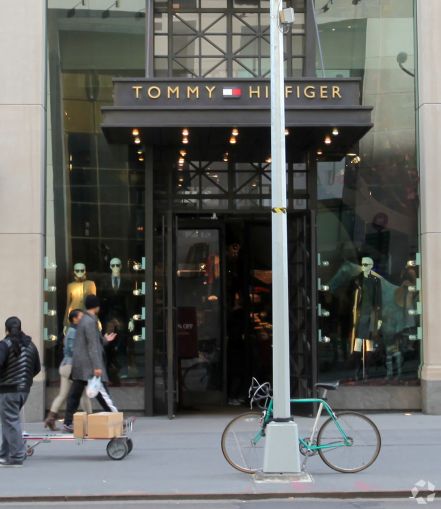 Another retailer is fleeing Fifth Avenue.

Clothing company Tommy Hilfiger closed its 22,000-square-foot, four-level flagship at the base of 681 Fifth Avenue yesterday, less than a decade after it opened its doors, Women’s Wear Daily first reported.

PVH Corp., the apparel conglomerate that owns Tommy Hilfiger, said in a statement provided to Commercial Observer that it shuttered the Fifth Avenue outpost and plans to close a location in Miami next month so it can “focus on next-generation retail experiences.”

“We are reshaping our retail landscape in North America,” Daniel Grieder, the CEO of Tommy Hilfiger and PVH Europe, said in a statement. “Going forward North America will be the lighthouse region to develop and test new modular, digitally infused retail concepts.”

Representatives for Metropole Realty Advisors, which owns the office building at 681 Fifth Avenue since 2005, did not immediately respond to a request for comment.

Tommy Hilfiger’s closure came two days before PVH plans to release its fourth-quarter earnings statement and is the second PVH-branded flagship recently to announce plans to leave New York City. Calvin Klein, also owned by PVH, said in January it will close its 25,000-square-foot outpost at 654 Madison Avenue in the spring, Bloomberg reported.

One seasoned retail broker said it was not a surprise that Tommy Hilfiger’s flagship, which opened in 2009, had closed.

“The space was on the market for over a year—actually I think over two years—for sublease,” the broker said on the condition of anonymity. “It’s a little dispiriting on the heels of Ralph Lauren and Gap and Henri Bendel and Lord & Taylor. It’s not exactly great news.”

As CO reported last September, L Brands announced that it planned to close all of its Henri Bendel department stores nationwide, including the 85,917-square-foot flagship at 712 Fifth Avenue, after 123 years. The store closed in January.

“What once was considered as prime Fifth Avenue retail is now, for the most part, many vacant storefronts,” said John Brod, a partner at ABS Partners Real Estate. “The fact that New York City experienced one of its best years as far as tourist visitors of over 62 million in 2018, but no longer has the impact on retail sales on Fifth Avenue as it once did, speaks to the impact of the new digital retail experience.”

What’s happening with Tommy Hilfiger is “indicative of the challenges these casual brands face in the era of fast-fashion, athleisure wear and designer sneakers,” commented Peter Braus, the managing principal at Lee & Associates NYC. “They have no great following and no real identity. Combine that with the huge rent of a Fifth Avenue flagship and you get a rough ride.”

The broker who spoke on the condition of anonymity added that with how well Hudson Yards has fared, Fifth Avenue and Midtown “can’t rest on their laurels.” Landlords there need to figure out how to draw retailers to their spaces, he noted, suggesting that might have to be in the area of rents.

Another broker echoed that sentiment.

“It seems to me that Fifth Avenue is in transition again, and needs a shining star to pump some energy into the mix,” said Compass‘ Robin Abrams. “As many of the fashion brands appealing to the masses lose their appeal and their luster, and their sales decrease, they can no longer afford the expense of a Fifth Avenue flagship. Fifth in the 50s seems sustainable for high-ticket accessories, jewelry and watches with the 40s relevant for fast-fashion, activewear, athletic footwear and cosmetics. Not to mention that Downtown, Hudson Yards, Soho, Meatpacking and Flatiron [District] are all competing for these tenants.”