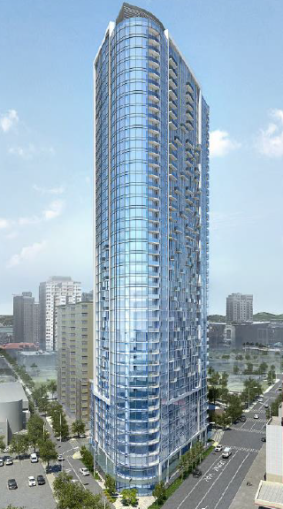 Square Mile Capital Management and ULLICO have teamed up to provide $185 million in financing for the development of SPIRE—a 352-unit condominium property in Seattle, Wash., being developed by Laconia Development and Vanke Holdings, Commercial Observer can first report.

Laconia Development first acquired the site—a 10,660-square-foot triangle-shaped piece of land—in 2004, but its plans to erect a 300-foot tower were scuppered by the great recession, Laconia CEO Paul Menzies told CO. The developer had several other projects in process when the recession ended and jumped back into developing SPIRE 18 months ago, increasing the planned tower’s height to 400 feet.

Today the 41-story property, located at 2218 5th Avenue, sits on the junction of Seattle’s South Lake Union, Uptown, Denny Triangle and Bell Town neighborhoods and a quarter mile from the Space Needle. Designed by VIA Architecture, SPIRE’s sculptural glass silhouette and clean, modern lines will take pride of place in Downtown Seattle’s skyline.

SPIRE’s one-, two- and three-bedroom units, which feature panoramic views over Seattle, are currently under development. Construction is expected to wrap in winter 2020. amenities are set to include a third-floor coworking lounge and wellness studio as well as the penthouse SPIRE Club—a collection of indoor and outdoor social spaces and a two-level fitness club.

Square Mile and ULLICO had a competitive edge in the financing because they’re “super intelligent and super experienced,” Menzies said. “Sometimes lenders in a construction project aren’t interested in what [developers] have to say. But Square Mile and ULLICO listen and have a ‘can do’ attitude when an idea is accretive to a deal. Construction projects are complex, they understand that and work with us as partners would.”

There was a dearth of condo projects in Seattle until roughly 18 months ago, Menzies said, but SPIRE has already had tremendous reception from the market, pre-selling over 20 percent of its units. In addition to its several other attributes, Seattle is currently dominating the high tech space. “Like Silicon Valley, but with a little more rain,” Menzies said and laughed. “It’s a phenomenal city.”