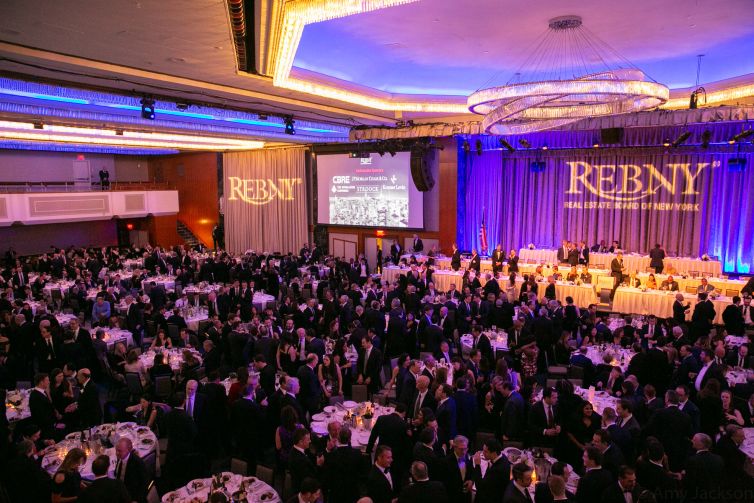 Roughly 2000 attendees pack the ballroom of the Midtown Hilton at the 2019 REBNY Banquet. Photo: Jill Lotenberg

The coming year may be a bumpy one for the real estate industry, as political and economic winds seem to be shifting against landlords. But the Real Estate Board of New York’s annual banquet was, as usual, a star-studded affair that drew some of the biggest developers, brokers, politicians, lawyers, accountants, owners and investors in Gotham to the ballroom of the New York Hilton Midtown.

Partygoers at the 123rd REBNY gala offered mixed predictions on how the city real estate market would fare in 2019. The state legislature plans to dramatically reform the rent-regulation system that governs New York City and the adjacent counties, interest rates are set to rise, and city’s residential and commercial markets are starting to soften. We asked a few of the 2,000 attendees what they thought about the outlook for this year.

On the investment sales market, Brookfield Property Partners Chairman Ric Clark was optimistic. “The world’s awash in capital and they like what we have here in New York City,” he said. “I don’t think there’ll be a downturn.”

Many real estate players worried about how rent reforms would affect the city’s housing market. The state legislature is mulling measures that would make it harder for landlords to raise rents after tenants move out or after renovating apartments and building systems.

“If there’s a change, the change I believe is going to happen isn’t going to be good for the city,” said Luise Barrack, a landlord lawyer and head of the litigation department at Rosenberg & Estis. “If you want to end up with substandard housing, that’s the way to do it.”

Veteran broker Robert Knakal, the chair of investment sales at JLL, said, “I think it’s going to be bad. I don’t think the policymakers who are proposing these policies understand the effect it’ll have on the quality of the housing stock.” However, Knakal forecasted that 2019 would be an even better year than 2018 for buyers and sellers of property.

Deputy Mayor Alicia Glen, who handles the mayor’s real estate and economic development policy, felt that the real estate industry would be just fine in the face of policy changes that promise to cut profits for residential owners. “The current situation is not working for anybody,” she said. “We do need to make sure we’re not incentivizing bad behavior. I think there’s a legitimate place where we can do better by the people who need to do better and not fundamentally disrupt the market.”

When asked about owners’ fears that they won’t make enough revenue to maintain their properties, she replied, “That’s what they said when I did mandatory inclusionary housing, that there would never be a building built in New York City. But last time I checked, there were more cranes than there ever were.”

As for the market, the former Goldman Sachs exec guessed that “there’s probably going to be a little bit of a slowdown, but the market’s been so hot and so frothy, I don’t think it’s fundamentally going to have a big impact. There’s going to be fewer and smarter deals.”

And as a newly Democratic state senate considers revamping the city rent laws, several state senators were spotted among the throngs of schmoozing real estate pros, including Housing Committee chair Brian Kavanagh, Todd Kaminsky, Kevin Parker, Timothy Kennedy, Catharine Young and James Skoufis. City Councilmembers Kalman Yeger and Donovan Richards also came through. Towards the end of the dinner, Senator Chuck Schumer gave a speech to celebrate his longtime friend and John Zuccotti Public Service Award winner Carol Kellermann, who just stepped down as president of the Citizens Budget Commission. He also joked about the government shutdown and issued pleas for the Trump administration to fund the construction of the Gateway Tunnel.