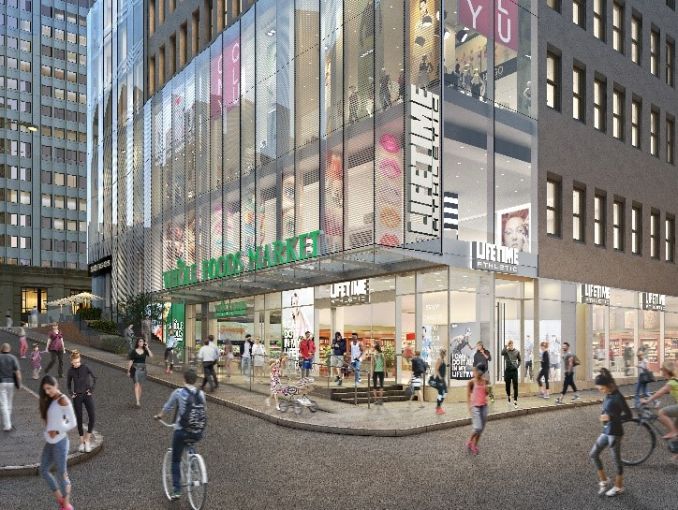 Life Time is bringing a second fitness center to Manhattan, having signed a lease last week for 74,000 square feet at Macklowe Properties‘ 1 Wall Street, Commercial Observer has learned. The fitness center, slated to open in the second half of 2020, will span four floors including a small piece on the ground, per a Life Time spokeswoman.

The fitness center is much smaller than the average Life Time fitness center (which averages 120,000 square feet), but larger than the other one in Manhattan, a 65,000-square-foot facility at Moinian Group’s Sky residential rental building at 605 West 42nd Street, opened in 2016. The FiDi location will not have a basketball court like the one pro-player Carmelo Anthony designed at Sky, but it will have fitness classes, cycle yoga, Pilates, personal training, a café and a kids academy, a membership program for kids from 3 months to 11 years old with weekly classes in karate, yoga, music, Spanish immersion and tumbling.

Life Time’s 1 Wall Street space, which is at the corner of New Street and Exchange Place, includes 3,800 square feet at grade, where there will be the entrance and the café, and the balance is split on three stories below ground, according to Joe Mastromonaco of The Dartmouth Company, who along with Fritz Kemerling represented Life Time in the deal. RKF‘s Peter Whitenack, who along with Jackie Totolo and Scott Zinovoy brokered the deal on Macklowe’s behalf at the base of the former home of Bank of New York Mellon, said beyond the ground floor there is 24,000 square feet on the level immediately below grade, 17,000 square feet on the level below that and 28,000 square feet on the one below that. The Life Time spokeswoman, Mastromonaco and Whitenack declined to provide the terms of the lease.

“We know the lives, habits and needs of our members are demanding and look forward to bringing them an exceptional experience with the unique and comprehensive healthy-way-of-life approach we’ve established across the country,” Bahram Akradi, the founder and CEO of Life Time, said in a prepared statement. “In partnership with [Macklowe Properties company head] Harry [Macklowe] and Macklowe Properties, this extraordinary development in such an iconic building and bustling location, allows us to deliver our best programs and performers, along with a commitment to positively change lives every day.”

“When we first got this assignment Harry wanted two things: a food market, potentially a food hall. He also wanted a fitness center,” Whitenack said. “We found the best in class of both of those.” No one from Macklowe was available to talk about the deal.

Macklowe Properties is converting the tower into a 566 unit residential condominium building with 175,000 square feet of retail, which includes Whole Foods in 43,000 square feet (slated to open in the first quarter of 2020, per Whitenack). Macklowe bought the building at the beginning of 2014 for $585 million. The apartments are starting at just below $1 million for studios and one-bedrooms up to “well over $10 million” for a three-bedroom at the top of the 56-story building, according to CORE‘s Shaun Osher, the exclusive residential agent for the building. The apartments will hit the market some time this year, but a timeframe wasn’t immediately clear.

Life Time is “a huge amenity,” for the residents upstairs, Osher said, adding, “Buyers are going to love this. This is a great addition to a residential address, which will definitely move the needle, certainly Downtown.”

As CO reported this past December, some fitness centers are going bigger as health and wellness becomes multigenerational.

Mastromonaco is working with Life Time to open a total of eight to 10 centers in Manhattan and a few in the outer boroughs. Since its founding in Minnesota 27 years ago, Life Time has 141 fitness centers in 39 markets in 28 states. Individual gym membership is $180 a month at Sky, with a comparable price expected at 1 Wall Street, the Life Time spokeswoman said.