Fitness Centers Go Bigger to Meet Desires of All Ages 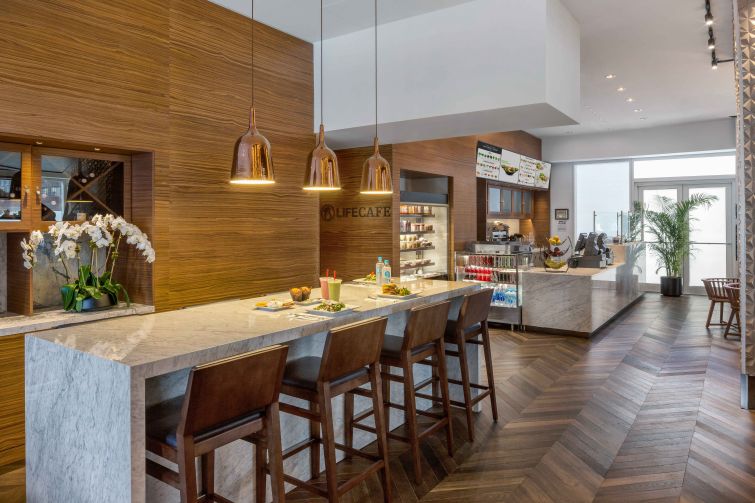 Moinian Group has a 70,000-square-foot Life Time athletic center at the Sky at 605 West 42nd Street, which includes a café. Photo: Moinian Group

While slimming down is the goal, the bigger-is-better trope seems to be applicable, too—to fitness centers.

At the Village at Gulfstream Park, a shopping plaza in Hallandale Beach, Fla., Madison Marquette is helping the owner, Stronach Group, “reimagine and re-merchandise” the 280,000-square-foot expanse of retail Tom Gilmore, the chief strategy officer of retail solutions at Madison Marquette told Commercial Observer at International Council of Shopping Centers’ New York Deal Making conference as a sprawling mecca of robust health. The fitness campus will be 100,000 to 125,000 square feet and Madison Marquette is talking to wellness brands Life Time and The St. James about potential concepts there.

The reason such a large facility would work, Gilmore said, is that it is “multigenerational.” And more and more people are investing in self-care, he added, because insurance companies are “being more open to proactive health and wellness.”

Life Time has 138 outposts in 38 major markets in the U.S. and Canada, including a 65,000-square-foot facility at Moinian Group’s Sky residential rental building at 605 West 42nd Street, opened in 2016.

“Moinian created amenities at Sky that offer the utmost levels of both luxury and convenience,” Jacob Entel, the director of residential properties at Moinian Group, said via a spokeswoman. “So much so that you could argue that there’s no need for residents to leave the building. This includes Life Time fitness, which includes a state-of-the-art fitness center, indoor and outdoor pools, lounge, café, spa and full-size basketball court. They see it as more than just a fitness center. It is a peaceful space where many residents go to handle business matters, relax, eat and meet with other Life Time athletic members.”

The St. James is a sports, wellness and active entertainment venue. It has a recently opened location in Springfield, Va. and a facility coming to Chicago in 2020. Both clock in at 450,000 square feet. The complexes feature “a state-of-the-art sports complex, premium health club and spa, active entertainment center and more,” according to its website.

“We are seeing [this all-in-one wellness center] as a trend purely because people are focused on living as long as they can,” said Anjee Solanki, the national director of retail services in the U.S. at Colliers International. “People are focused on their well-being.”

Two examples, she said, are Life Time as well as San Francisco-based active lifestyle and hospitality company The Bay Club Company. In the last several years, per a company press release, The Bay Club Company has “entered the realm of hospitality by grouping complementary properties into campuses and offering its members a range of high-end lifestyle amenities typically only found at country clubs and luxury resorts.”

Equinox, while it hasn’t changed its business model or fitness center size that much (most Equnioxes are in the 30,000- to 35,000-square-foot range, but for Equinox Sports Clubs, which came through acquisitions and are in the 80,000- to 100,000-square-foot range), for new facilities it is adding more “touch-down lounge” space for members, according to Jeffrey Weinhaus, the president and chief development officer at Equinox.

“I think we are becoming more flexible and more creative in terms of our offerings to be reactive to what’s going on with consumer behavior” and putting a “mix between live and work and exercise and dine all under one roof,” he said.

At its Hudson Yards facility, at 35 Hudson Yards, Equinox is building its biggest center yet at 60,000 square feet. In addition, there will be a SoulCycle in the building (Equinox owns SoulCycle).

Michael Hirschfeld, a co-leader of national retail tenant services within the U.S. at JLL, said the fitness complex idea is “very viable,” particularly as part of a repurposing of a shopping center, possibly in a vacated department store.

Beyond large facilities, some companies are aggregating micro-fitness concepts under one roof.

The Alex Rodriguez-backed TruFusion has “five studios under one roof, offering 240 classes a week in 65 different sales,” according to its website. It has 13 locations including TruFusion Soho coming to 136 Crosby Street soon. Madison Marquette is considering bringing a 12,000-square-foot TruFusion to its five-story, 339,000-square-foot project Pacific Place, in Seattle, which it is redeveloping.

And some properties are clustering fitness concepts. Feil Organization’s 1151 Third Avenue at the corner of East 67th Street, is home to exercise brands FlyWheel Sports, SLT (Strengthen Lengthen Tone) and Fhitting Room. Each studio occupies its own floor and they are each about 2,500 square feet, according to Christopher Conlon, the COO of Acadia Realty Trust, the owner of the building until 2017.

Co-tenancy makes sense; Dr. Charles Anderson, the regional director of Modern Acupuncture, the nation’s first acupuncture franchise, said on a wellness panel at ICSC that when looking for real estate, he wants other health and wellness brands—those that would “attract similar demographics”—next door.