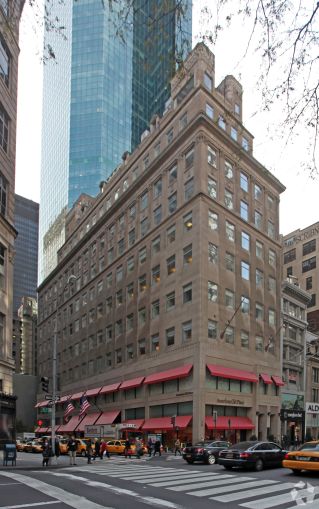 Coworking giant WeWork, which has become the largest office tenant in Manhattan, will take over the entire office portion of a Midtown building.

WeWork has signed a deal for the full 138,563-square-foot office portion of SL Green Realty Corp.’s 609 Fifth Avenue between East 48th and East 49th Streets, The New York Post first reported. The company will assume the third to the 13th floors for a location to open early next year, according to a press release from the landlord.

A source with knowledge of the deal said the asking rent was $89 per square foot. Spokespeople for WeWork and SL Green would not disclose the length of the lease.

“This is an iconic location, and when the opportunity to take over the entire office space presented itself, we simply could not say no,” Granit Gjonbalaj, the chief development officer at WeWork, said in a statement. “Given the demand we are seeing in the area, we have no doubt that our fast growing community will be a perfect fit for this newly revitalized building.”

Peter Riguardi, Michael Berg and Howard Hersch of JLL represented WeWork in the deal while SL Green handled it in-house. A spokesman for JLL declined to comment.

SL Green recently finished renovations to 609 Fifth Avenue and leased parts of the ground floor and basement along with the entire second floor— for a total of 24,000 square feet—to Puma in March, as Commercial Observer previously reported. All that remains vacant is a 4,941-square-foot retail space.

“We’re delighted to welcome WeWork to 609 Fifth Avenue as we strategically expand our relationship,” Steven Durels, SL Green’s executive vice president and director of leasing and real property, said in a statement. “Our redevelopment design, which includes relocation of the existing Fifth Avenue lobby together with the entire elevator core to the 49th Street side of the building, added high value retail space while also creating an enhanced office environment.”

The deal comes less than a month after WeWork leased an entire Flatiron building. The company agreed to take the entire 100,000 square feet of office space at 35 East 21st Street from Centaur Properties for its recently launched HQ by WeWork, as CO previously reported.