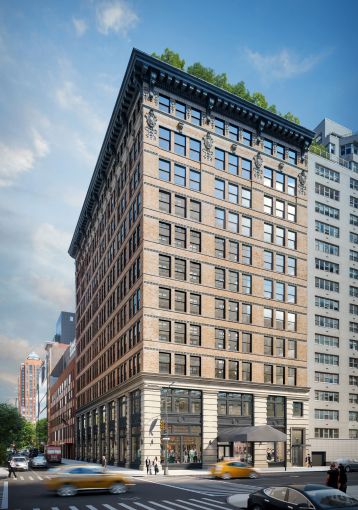 The ownership duo of Madison Capital and Lubert-Adler Partners has scored an $88.5 million loan from PGIM to refinance an office and retail building near Union Square, Commercial Observer can exclusively report.

The three-year bridge loan will support the lease-up process at 71 Fifth Avenue following an $11 million renovation that upgraded common spaces, elevators and tenant spaces, per information from Madison. The New York-based investment company paid $85 million for a 99-year ground lease for the building a year and a half ago from Samco Properties and the family of WeWork real estate chief Mark Lapidus, who still own the plot of land above which the building stands between East 14th and East 15th Streets. Madison and Lubert-Adler also pay rent of $3.5 million per year to the former owners.

Home furnishings retailer Pier 1 Imports had leased nearly 18,000 contiguous square feet of space on the building’s first two floors, but the store has been split into two portions since Pier 1 vacated the space last year. Well, a holistic health care provider, will rent 13,000 square feet of the retail component for a facility to open early next year, while the remaining space is on the market for an asking rent of $425 per square foot, The New York Times reported last week.

Higher up, WeWork occupies 44,300 square feet on four floors, and other office tenants include The Gate, an advertising firm; a public relations agency called Allison + Partners and Ovation Corporate Travel, according to CoStar Group data. The 11-story building went up in 1907.

“Since acquiring 71 Fifth Avenue in 2017, we undertook efforts to modernize the property, enhance tenancy and give the building a stronger identity in the market,” Jonathan Ratner, a managing director at Madison Capital, said a statement. “PGIM was flexible in structuring the financing to meet our needs for the next phase of the investment.”

“The highly desirable location of this mixed-use property and the strength of the sponsor and their business plan make this an attractive financing opportunity that will provide income-driven cash flow over the loan term for our investors’ portfolio,” Bailey said in prepared remarks.

Headlined by investments in a new Mount Sinai Beth Israel hospital and a public-private tech training center, the area around Union Square Park has secured more than $450 million in new development money since the start of 2017, according to neighborhood business group Union Square Partnership. Over that same period, the blocks east of Avenue of the Americas between West 12th Street and West 20th Streets have tallied 20 new restaurants and 13 additional retailers. A consumer survey by the business group found that the square’s four-day-per-week Union Square Greenmarket attracts up to 344,000 shoppers on summer days.

Representatives for Lubert-Adler did not immediately respond to inquiries.