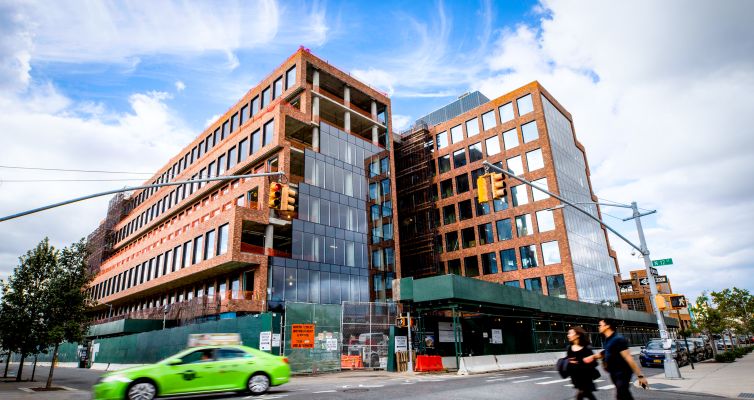 Heritage and Rubenstein Partners recently completed work on an office and industrial building at 25 Kent, pictured here while it was under construction last year. Photo: 25 Kent

There’s no shortage of hysteria in the media when it comes to the Canarsie Tunnel Reconstruction.

The panic is so mainstream, in fact, that “Canarsie Tunnel Reconstruction” likely does not mean anything to most people. More than likely, people know it as the impending “L-Train Apocalypse” or “Doomsday L-Train Shutdown.” And that frenzy is perhaps at its peak level in Williamsburg, the community most closely impacted by the shutdown.

The reconstruction is set to starting April. While we should expect some issues during the transition period, we should also recognize that groups like the L-Train Coalition—which includes residents, business owners, landlords, and elected officials—are in place to continuously help refine and optimize the mitigation effort. On the whole, there is a system in place to correct what kinks may still exist within the plan on day one or may arise thereafter.

Beyond the hyperbole of the shutdown’s impact, what the doomsday narrative misses is context.

For the Williamsburg commuter, the L-train tunnel reconstruction will no doubt temporarily translate into a longer, likely more frustrating commute. But that’s the short-term perspective. The reconstruction is projected to last 15 months. While that timeframe is nothing to scoff at, the average New York City renter lives in their apartment for three years—more than double the length of the service interruption.

Looking at the long-term, the L-train reconstruction is going to include substantial and desperately-needed infrastructure improvements that will amount to a far more reliable train service. That the L-train is getting these improvements is actually a huge benefit to people who rely on the L-train to commute between Brooklyn and Manhattan for their jobs.

For the Williamsburg business owner, the L-train tunnel reconstruction presents an unknown in terms of the immediate impact. That unknown is a difficult front to face, especially for small businesses and startups.

Shop local campaigns and the utilization of the many co-working spaces along the L line can certainly help address the anxieties of those near-term unknowns.

“While business owners are obviously concerned about how the lack of L-train service will affect Manhattanites patronizing their establishments, the community still prides itself on catering to locals (as well as domestic and international tourists) who choose to stay in Williamsburg and its surrounding neighborhoods,” said Paul Samulski, President of the North Brooklyn Chamber and a member of the L-Train Coalition Executive Committee. “Don’t be surprised if there’s an uptick in local business as residents look to avoid the hassle of traveling into Manhattan, work virtually from home or remote locations, and increase their local shopping and nightlife activities.”

On the long-term, however, Williamsburg and other neighborhoods along the L line have perhaps the deepest well of opportunity of any neighborhoods in the City. And that long-term known viability far outweighs the immediate anxieties.

“Williamsburg remains one of Brooklyn’s most popular neighborhoods with its uniquely hip vibe, cultural diversity and spectacular waterfront views,” continued Samulski. “And the concentration of popular restaurants, bars and live music venues is among the highest in Brooklyn.”

“In the context of a long-term lease, typically 10-15 years, the 15-month L-train interruption is hardly a barrier to entry,” said David Falk, President of the New York Tri-State Region at Newmark Knight Frank. “Now is the time for progressive, innovative companies to get in on the ground floor of the Williamsburg office market. A move to Williamsburg is a brand statement and a commitment to the creative workforce that powers these companies. That workforce already lives on the Brooklyn end of the L line. Why make them commute into Manhattan at all, when Williamsburg is ready now and viable for the long term?”