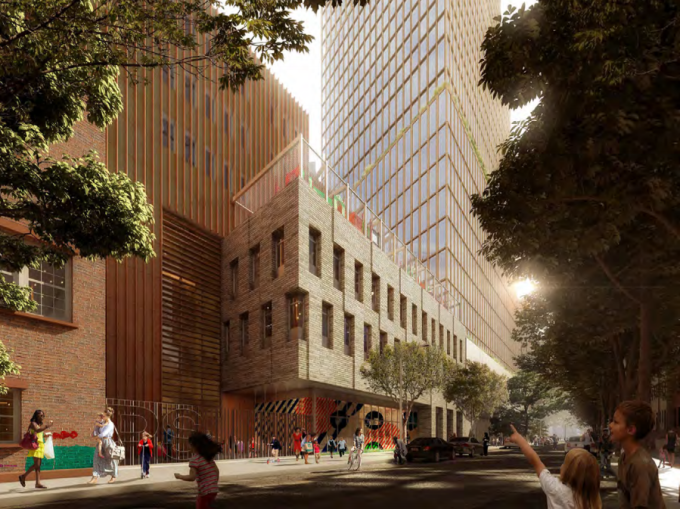 A large and divisive mixed-use development planned for 80 Flatbush Avenue in Brooklyn has gotten a sign-off from the City Planning Commission and will go on to the City Council for a vote later this summer.

The vote was unanimous, with one commissioner abstaining and a second recusing herself.

The five-building, 1.3-million-square-foot complex will bring 922 apartments (25 percent of which will rent for below-market rates), two schools and a cultural center to a wedge-shaped lot across from Atlantic Terminal, on the border between Boerum Hill and Downtown Brooklyn. Dumbo-based Alloy Development is partnering with the New York City Educational Construction Fund to build the complex, which will include two 350-seat public schools, 245,000 square feet of office space and 40,000 square feet of retail. The developers are pushing an upzoning through the uniform land use review process (ULURP) in order to build the project, which will be defined by two towers reaching 74 and 38 stories.

The development drew plenty of opposition from neighborhood groups, activists and local politicians during a lengthy hearing at Brooklyn Borough Hall in May, but it also received supportive testimony from pro-development groups, transportation advocates, labor unions and civic organizations.

Jennifer Maldonado, the executive director of the ECF, said the agency was “pleased to have received the unanimous approval of the City Planning Commission for the 80 Flatbush project. This project will bring hundreds of new K-5 school seats to downtown Brooklyn, and help revitalize an aging school building.”

The project heads to the City Council zoning subcommittee for a vote next week, followed by the council land use committee. The full council has to vote on the proposal by the end of September. Councilman Steve Levin oversees the district in which the property sits and has the final say over whether Alloy and ECF get their rezoning.

“We appreciate that the City Planning Commission took the time to review our application,” said Alloy CEO Jared Della Valle in a statement. “Today’s vote reflects the widespread support we’ve received for a rezoning of a wealthy, transit-rich area that supports density. The consensus among those supporters is that building in Downtown Brooklyn along Flatbush Avenue and across from one of the largest transit hubs in the city to deliver much-needed permanently affordable housing, two public schools and cultural space makes 80 Flatbush a model for thoughtful urban planning and development. It’s critical that our city build more housing to address the affordability crisis and we can’t think of a more appropriate location to do that.”