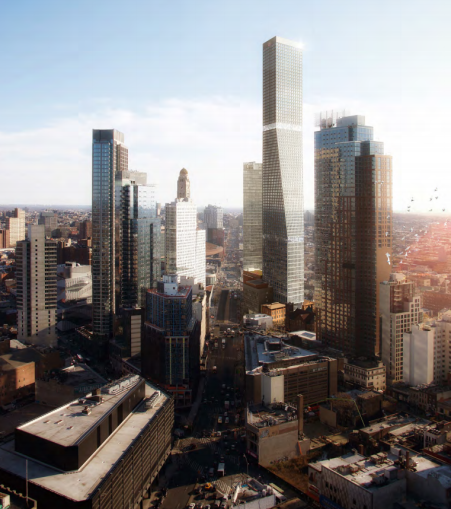 A controversial multi-building development proposed for 80 Flatbush Avenue across from Atlantic Terminal in Brooklyn is pitting a nascent group of pro-development activists against community groups and neighbors. Both sides were out in full force at Brooklyn Borough Hall for a public meeting hosted Monday night by Borough President Eric Adams.

Alloy Development, which is building the five-building complex in partnership with the New York City Educational Construction Fund, plans to construct two mixed-use towers rising 74 and 38 stories, two schools and a 15,000-square-foot cultural center on a wedge-shaped block between Flatbush Avenue, State Street and Third Avenue, on the border between Boerum Hill and Downtown Brooklyn. Since the development requires a significant upzoning, the proposal is currently making its way through the city’s public review process. Community Board 2’s land use committee struck a blow against the project when they unanimously voted it down last month, but the full board will consider it on May 9 before it goes to the Borough President’s office.

The project will encompass 922 apartments (including 200 affordable ones), a new 350-seat public high school for Khalil Gibran International Academy, which currently occupies five aging buildings on the site, and a new 350-seat elementary school. Khalil Gibran is an 11-year-old public high school that offers classes in English and Arabic and emphasizes an understanding of Arabic culture. Two of the school’s weathered buildings will be revamped into the yet-to-be-determined cultural center and retail as part of the 1.3-million-square-foot project. 80 Flatbush will also bring 245,000 square feet of office space and 40,000 square feet of retail to a neighborhood where Atlantic Terminal Mall has long been the defining shopping presence, and Two Trees Management Company’s recently completed 300 Ashland Place brought a new Apple Store and Whole Foods 365 store to a site across the street.

If Alloy gets its rezoning, it hopes to start construction in 2019 and finish the development’s first phase—the schools and the 38-story building with market-rate apartments and offices—in 2022. The second tower, which is expected to hold the 200 below-market apartments, would be complete in 2025.

Real estate and business leaders spoke in favor of the development, bolstered by a number of pro-development activists from a new group called Open New York, as well as transit organizers and union members from 32BJ SEIU. Joseph Botros, chair of the Arab-American Family Support Center, submitted a petition signed by more than 600 people in support of the project, which he said would expand the school’s facilities and add a new gym, science labs, art room, cafeteria, library and music room.

Lori Raphael, a vice president at the Brooklyn Chamber of Commerce, said, “​It is imperative that we manage growth carefully… But demand for office space in Downtown Brooklyn is at a record high. More businesses want to be based here, and this project will create 200,000 square feet of Class A office space. The floorplates are well-sized for creative tenants coming into the market.”

TerraCRG brokers Dan Marks and Chris Havens both testified in support of Alloy’s proposal, along with various architects, real estate lawyers and developers who live in the neighborhood. Havens reiterated that the development would fill a growing need for new commercial space in this part of Brooklyn.

Nick Sifuentes, the executive director of Tri-State Transportation Campaign and Riders Alliance, also backed 80 Flatbush because of the development’s lack of parking and proximity to a dozen subway and commuter rail lines at Atlantic Terminal.

“New York’s excessive requirement of space for parking in new developments, particularly developments that are in transit-rich communities, is an antiquated and anti-urbanist policy that encourages car ownership rather than investment in public transportation, production of affordable housing and more sustainable forms of growth,” he said.

Several YIMBY (Yes In My Backyard) activists pushed for the proposal, highlighting the economic pressures of the housing crisis, tenant displacement and rising rents in Brooklyn.

“​If [tenants] don’t go into the new towers like 80 Flatbush, they’ll go into Boerum Hill, Cobble Hill and Fort Greene and drive up rents there, displacing tenants to neighborhoods like Bed-Stuy, Sunset Park and Flatbush,” said Ben Thypin, the organizer of Open New York. “There seems to be a belief in this room that these new towers will cause gentrification, which is ironic because many of the white people against this project are gentrifiers themselves.”

Ben Murray, who first moved to Downtown Brooklyn five years ago with his partner, said that he “​empathizes with [opponents’] concern over the height and density this building will bring. But we need smarter use of land in New York City and we need more housing near transit. It’s for the benefit of the entire neighborhood that I stand in support of this project.”

On the other side, the folks who opposed the project included the usual suspects: community garden members who didn’t want shadows cast on their plots, neighbors, local elected officials, and members of the Cobble Hill, Brooklyn Heights and Fort Greene neighborhood associations. The taller of the two towers would reach up to 986 feet and overshadow the 512-foot-tall Williamsburgh Savings Bank tower across the street at One Hanson Place, which reigned as the tallest building in the borough until the 531-foot-tall Brooklyner at 111 Lawrence Street was completed in 2010.

As Curbed New York and others have pointed out, many of the same local groups helped defeat the redevelopment of nearby Long Island College Hospital in Cobble Hill. Developer Fortis Group asked for a rezoning to build several large towers with a mix of affordable, market-rate and senior housing, plus a school and public space. When vocal neighbors successfully defeated the plan, the developer instead opted to build a number of shorter, luxury condo and rental buildings.

Letitia James, who represented the area in the City Council and now serves as the city’s Public Advocate, showed up later in the evening to push back against the proposed 80 Flatbush high-rises. Her former district—now repped by Councilwoman Laurie Cumbo—runs along Flatbush Avenue but does not include the 80 Flatbush site, which sits across the street in Councilman Stephen Levin’s territory.

“​I believe the shadows will override the neighborhood,” she said. “It’s not just a question of affordable housing or shadows. The Manhattanization of Brooklyn has affected our quality of life. ​I believe the developer should go back to the table and get it right but I urge [the Borough President] to reject this project and I urge the City Council to do the same thing.”

Some opponents mentioned the 2004 rezoning of Downtown Brooklyn, which was intended to create more than a million square feet of commercial space but instead produced 15,000 units of housing.

Peter Bray, executive director of the Brooklyn Heights Association, argued that Alloy’s complex would only strain the area’s infrastructure and exacerbate the growing need for school seats. Quoting the Borough President’s review of the Downtown Brooklyn rezoning, Bray said, “‘​Downtown Brooklyn is bearing the burden of unintended new residential development without a comparable level of infrastructure to sustainably support a growing community,’” adding, “The BHA would submit that this rezoning does not address the need [for 3,000 school seats].”

The Borough President’s office is just one stop in the city’s seven-month-long Uniform Land Use Review Process. After the community board’s vote next week, the Beep has a month to make his recommendation on 80 Flatbush. Then the project needs approvals from the City Planning Commission, City Council and possibly Mayor Bill de Blasio.