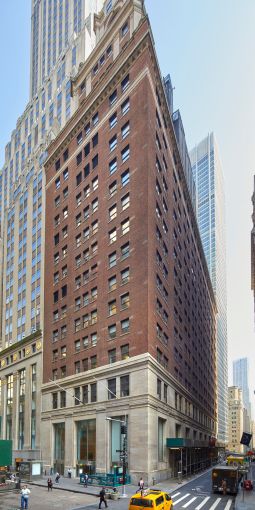 Creative advertising agency Joan Creative is moving its offices from NoMad to the Financial District after inking a lease for 11,734 square feet at Equity Office’s 44 Wall Street, Commercial Observer has learned.

Joan Creative is taking part of the 10th floor at the 24-story, 350,000-square-foot office building at the northwest corner of William Street, according to sources with knowledge of the transaction. The agency is expected to relocate from its current digs at 443 Park Avenue South in the fourth quarter of this year.

Asking rent in the deal was in the high $50s per square foot, the sources said, while the length of the lease was not immediately clear. C.J. Heitner and Howard Hersch of JLL represented Joan Creative, while Zachary Freeman and Scott Silverstein of Equity Office represented the landlord in-house alongside the CBRE team of Adam Foster, Michael Rizzo, Zachary Price and Caroline Merck.

The independent creative agency, founded in 2016 by former executives at digital media brand Refinery29 and advertising agency Wieden+Kennedy, has counted the likes of Google and General Mills among its clients.

“When seeking Joan Creative’s next home, we wanted an environment that would match our adventurous spirit, foster collaboration and inspire our team to think boldly,” Lisa Clunie, the agency’s co-founder and CEO, said in a statement. “44 Wall’s vivid design and exceptional location in the heart of a vibrant creative community proved to be the perfect fit.”

The Financial District has proven an increasingly luring draw for advertising and media industry tenants in recent years with the likes of advertising agencies GroupM, at 3 World Trade Center, and Droga5, at 120 Wall Street, among the firms that have made the move Downtown.

In a statement, Equity Office’s Silverstein noted that “Lower Manhattan has been transformed into the preferred location for the city’s most innovative media brands,” adding that Joan Creative was drawn to 44 Wall Street’s “bold aesthetic and contemporary environment.”

“We are thrilled to have a fast-growing and creative company like Joan Creative join the tenant roster at 44 Wall Street,” CBRE’s Foster said in a statement to CO. “CBRE and Equity Office quickly understood their objectives and were able to offer them a combination of cutting-edge design and flawless construction and transaction execution.”

Blackstone Group-owned Equity Office is currently finishing a “modernization program” to upgrade the 1927 building that includes a renovated lobby and the construction of prebuilt floors featuring “high-end finishes,” according to the landlord. Other tenants at 44 Wall Street include law firm Cullen and Dykman and tech company GameChanger Media.

Representatives for JLL did not immediately return requests for comment.