‘Saved by the Bell’ Pop-Up Opens in West Hollywood 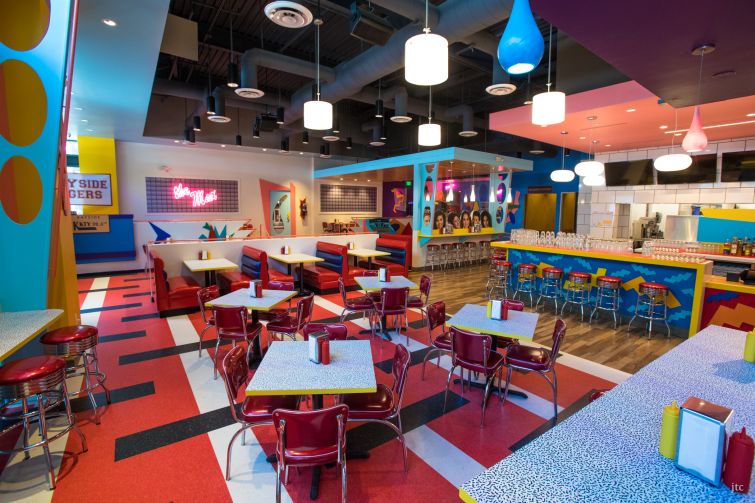 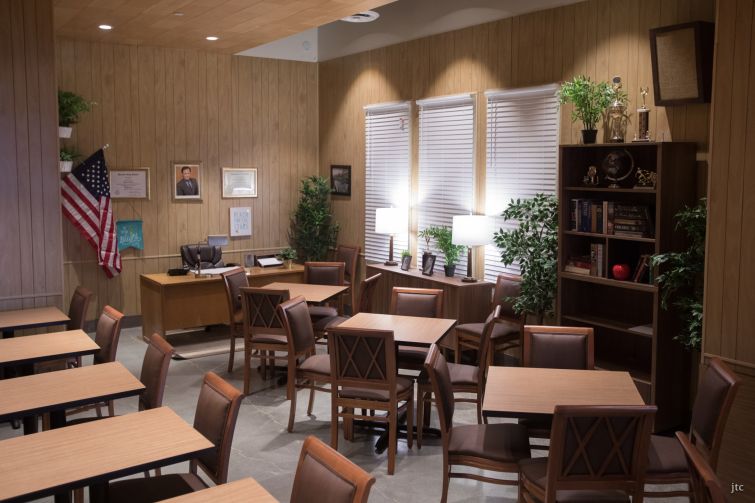 To the principal's office with you! Or the corner of the dining room where there's a replica of Principal Belding's office. Photo: Tyler Curtis 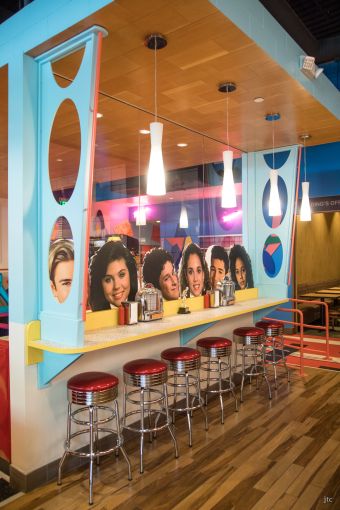 Cutouts of the stars are available for those selfie-hungry diners. Photo: Tyler Curtis 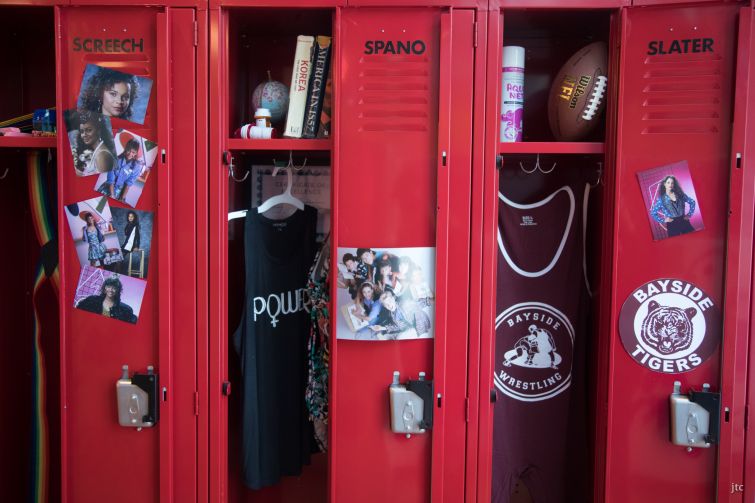 Lockers are set up just like in the show. Photo: Tyler Curtis 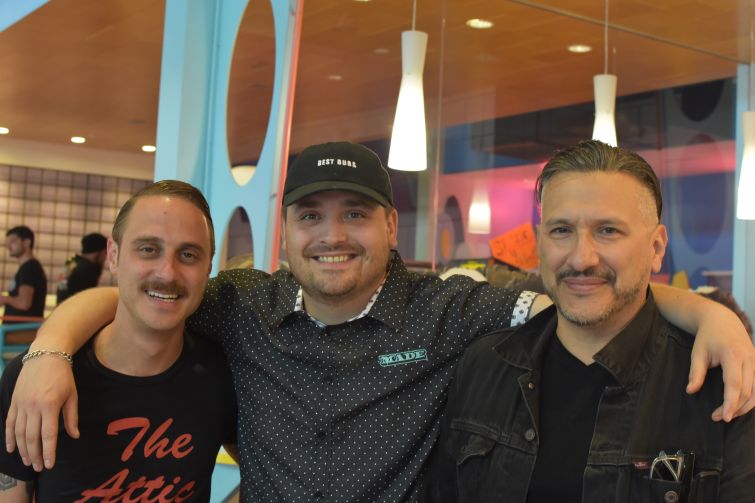 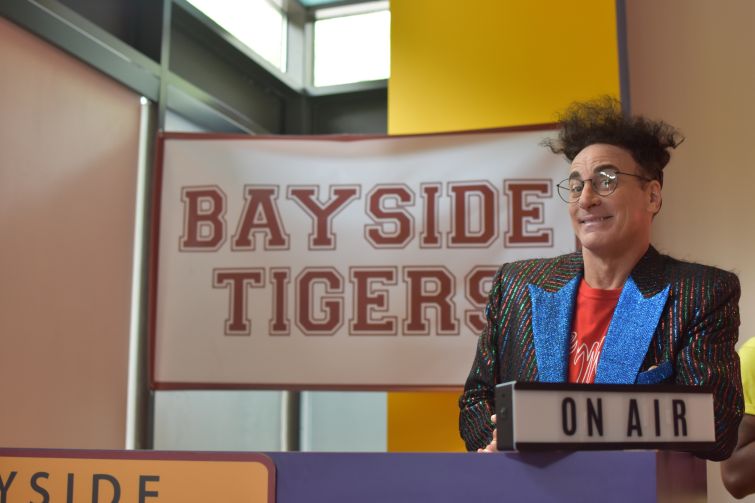 Who could forget this guy? Actor Ed Alonzo, who played Max in the show. Photo: Alison Stateman for Commercial Observer
Previous Next

Bayside has come home, so to speak, with the West Hollywood opening of the second iteration of a pop-up restaurant dedicated to the 1990s TV hit Saved by the Bell today. Called Saved by the Max, the restaurant occupies a 5,600-square-foot space on the ground floor of the West Hollywood Gateway Shopping Center and recreates the look and feel of the California-based Saturday morning show and The Max—Zack, Slater, Screech, Lisa, Kelly and Jessie’s favorite hangout.

Superfans of the show will take delight from the painstaking details taken to both recreate the diner, and references made on the menu, including a mixed drink made with diluted Red Bull Yellow, vodka and other libations called the “I’m so Excited,” in reference to the episode where Jessie ODs on caffeine pills. Nineties aficionados will likely enjoy the retro video games and details, while perhaps shuddering at memories of wearing similar outfits or—let’s face it—hairstyles.

The concept began in Chicago as an extension of a monthly nineties party created by Zack Eastman, Derek Berry and Steve Harris that resulted in a partnership with NBC, sellout crowds and a yearlong run.

For Los Angeles the commitment, like the physical footprint of the 1990s homage, is larger, with the partners signing a two-year lease for the space in 2017 at the center owned by Clarion Partners.

The space was formerly occupied by Lyfe Kitchen, which shuttered its doors just a year after undergoing a $2 million-plus Gensler designed gut renovation.

“I had a challenge leasing the space to traditional restaurants because it’s large and full-service restaurants these days with labor costs, it’s tough,” Gabe Kadosh of Colliers International, who handled both sides of the negotiations, told Commercial Observer. “Generally what people wanted was 2,500 square feet and this is more than double what people typically want. The scale of retail is getting smaller particularly in the food business where your labor costs have gotten so high.” (Minimum wage in California is $11 an hour for businesses with 26 or more employees and $10.50 an hour for businesses with 25 or fewer employees, according to government labor statistics, while the federal minimum wage is $7.25.)

Since Kadosh started marketing the space in early 2017, several restaurants expressed interest in taking a portion of it, with only a fitness group open to taking the entire footprint, before the Saved by the Max team called.

“It was a shame for someone to literally not use anything of these millions spent to renovate the restaurant, for someone to like literally take that out and turn that into a box for a fitness concept,” he said. “It also doesn’t do that much for the center in terms of activity. Then I got this call from these guys from Saved by the Max and I did a double take.”

The center, which is anchored by big-box retailers Target and Best Buy is also the future home of the revamped Formosa Café, a legendary Hollywood celebrity haunt dating back to the industry’s Golden Era, set to open in 2019. In the meantime, Kadosh said the Saved by the Max pop-up is helping to activate the space in the evening and the owner has been “thrilled” with the exposure their 269,000-square-foot property—the largest of such centers in West Hollywood—is getting.

Asking rent for the space was $55 per square foot annually, or $35,000 per month, he said, while declining to disclose further.

According to Zack Eastman, one of the founding partners of the retro concept, the L.A. run is already 70 percent sold on the stock available. (A “second semester” of tickets will be on sale starting this Friday on SavedByTheMax.com.)

Eastman and his partners are aiming for 300 guests a night at $40 a head, which includes an appetizer and entrée. Drinks, including those from the restaurant’s full bar, are additional. Though there is no limit, aside from waning social convention, on selfie-taking.

Aside from sentimental longing, the concept capitalizes on the growing popularity of experiential offerings geared toward millennials and social media, like the wildly popular Museum of Ice Cream.

Yet, according to Eastman, the Saved by the Max diner may also be answering a very intergenerational need for escape.

“We all kind of eat and drink our feelings I think in our own ways, right? Well here you can do much more than that, you can live out your fantasy of being on Saved by the Bell. You can just bask in the ‘80s and ‘90s pop culture, you can sit here and listen to music and have a drink,” he said. “So, for us, yes, it’s nostalgia-based, but, in addition to that, it’s more experiential. For us, when you come into our space, we want you to feel like you’ve been taken out of your daily life and your daily grind.”

When asked what’s next for the concept, Eastman said if the run in West Hollywood is successful, they’re open to extending their stay.

“If L.A. wants us, we’d love to stay. The landlord is really good. We love West Hollywood,” he said. “The township and city hall has been incredibly supportive and we feel like they have made a good home for us.”