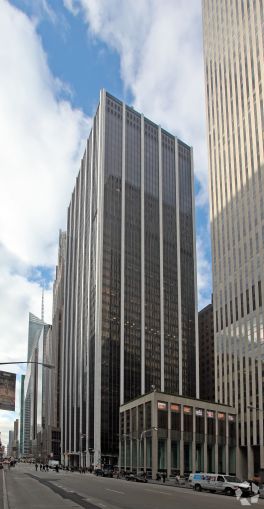 Engineering firm Syska Hennessy is packing up its Midtown offices and moving two blocks northeast of its current digs.

The firm inked a 15-year deal for 55,016 square feet on the entire fourth and fifth floors at 1185 Avenue of the Americas, landlord SL Green Realty Corp. announced in a release today. Asking rent for the space between West 46th and West 47th Streets was $75 a square foot, according to The New York Post, which first reported on the lease.

The mechanical, electrical, plumbing and communications technology engineer will relocate from another SL Green-owned building at 1515 Broadway between West 44th and West 45th Streets.

Steven Durels, SL Green’s leasing director, said in a statement that the commercial landlord was “delighted” that Syska Hennessy was moving in. He added that the company is renovating the building’s outdoor plaza and lobby as “part of our strategy to upgrade our buildings on an on-going basis to ensure our tenants continue to enjoy industry leading amenities, service and best-in-class work environments.”

Other big tenants in the building include 21st Century Fox, King & Spalding and Hess Corporation. 21st Century Fox currently occupies 165,000 square feet at the 1.1-million-square-foot office tower. However it will soon decamp to 128,000 square feet of new space in its longtime home at 1211 Avenue of the Americas, where it expanded to 777,000 square feet, last year as Commercial Observer reported.