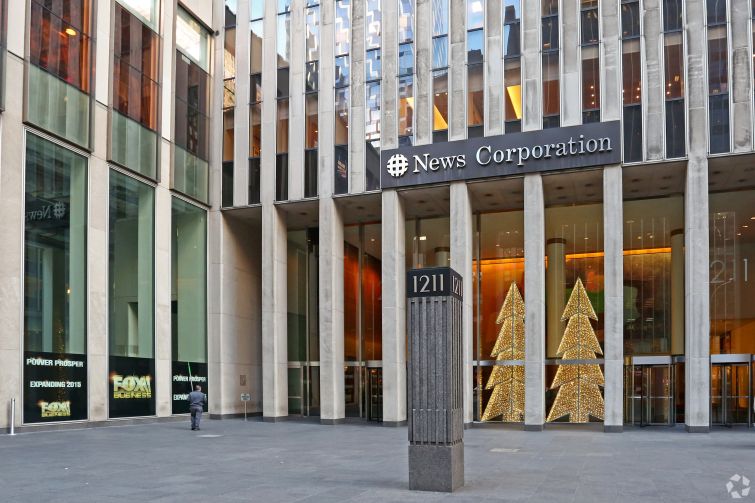 Almost a year to the day after deciding he wouldn’t move his companies Downtown, Rupert Murdoch has committed to keeping the firms in Midtown.

News Corp. and 21st Century Fox have re-upped for their massive footholds at 1211 Avenue of the Americas, a source familiar with the deal confirmed to Commercial Observer. Together the companies signed 1.2 million square feet in two deals at the 2-million-square-foot tower between West 47th and West 48th Streets. Asking rents weren’t immediately available.

The companies, which split as two independent entities in 2013, signed separate, restructured leases at the building, sources confirmed. The pair of media firms had been operating under a joint lease that dated back when they were a single conglomerate, one source in the know said.

Print and television conglomerate News Corp., which owns the The New York Post and The Wall Street Journal, signed a new lease for 444,000 square feet at the building that extends into 2027, sources said. The media giant, which also owns Fox News, had a lease that was set to expire in 2020, according to the Post, which first reported news of the deals.

21st Century Fox meanwhile is growing to 777,000 square feet at the Ivanhoé Cambridge– and Callahan Capital Properties-owned building, another source said. That includes a replacement of its existing lease, running into 2025, for 649,000 square feet, as well as a three-floor expansion for 128,000 square feet, according to sources. It wasn’t immediately clear on what floors the film and television company would expand.

That additional space is set to accommodate employees currently based at 1185 Avenue of the Americas between West 46th and West 47th Streets, according to the Post. The company currently occupies about 165,036 square feet at the SL Green Realty Corp.-owned building, according to CoStar Group. An SL Green spokesman did not immediately return a request for comment on if and when the company would vacate 1185 Avenue of the Americas.

Mary Ann Tighe, Timothy Dempsey, Ken Rapp, Christopher Mansfield and Ariel Ball of CBRE represented both News Corp. and 21st Century Fox in the transactions at 1211 Avenue of the Americas, while Josh Kuriloff, Mitch Arkin and Ethan Silverstein of Cushman & Wakefield represented the landlords. Both brokerages declined to comment via spokespeople.

Until this week’s restructuring, it was unclear whether the two companies would remain at their existing locations.

A year ago this week, Murdoch announced that he would pull out of a 1.5-million-square-foot deal to anchor the planned 2 World Trade Center in Lower Manhattan. He previously signed a non-binding letter of intent, but opted not to occupy the bottom half of the yet-to-be-built, 2.8-million-square-foot skyscraper because of a shaky global economy.

The decision put work on 2 World Trade Center on hold—as financing for the tower is dependent on an anchor tenant. Executives from Silverstein Properties, which is developing the building, told Commercial Observer last March that it still planned to have the tower completed by 2021.