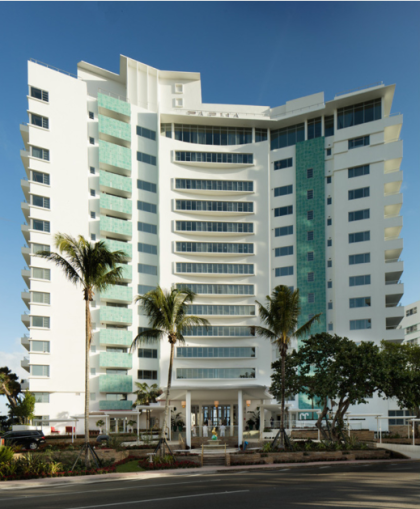 The 169-room Faena Hotel, the district’s crown jewel, is located at 3201 Collins Avenue and was previously the Saxony hotel, erected in 1948. Faena’s business partner Len Blavatnik purchased the property in 2011, and the duo teamed up with Baz Luhrmann—the film writer and director behind The Great Gatsby and Moulin Rouge!—and his wife Catherine Martin, an Academy Award-winning costume and production designer, to design the hotel’s interiors. It was named the No. 1 hotel in America in Condé Nast Traveler’s 2017 Reader’s Choice awards.

The luxury property features a 22,000-square foot spa, three restaurants and four bars, including a late-night lounge named The Saxony, a nod to the hotel’s predecessor.

HSBC provided a $300 million mortgage to Faena and Blavatnik in 2014 for Faena Hotel and  the Faena House condominium property—located at 3315 Collins Avenue—as reported by the South Florida Business Journal. One year later, HSBC lent another $80 million for underground parking to serve the two properties, plus Casa Faena.