The Plan: First Look at the Redesigned Condé Nast Cafeteria at 4 Times Square 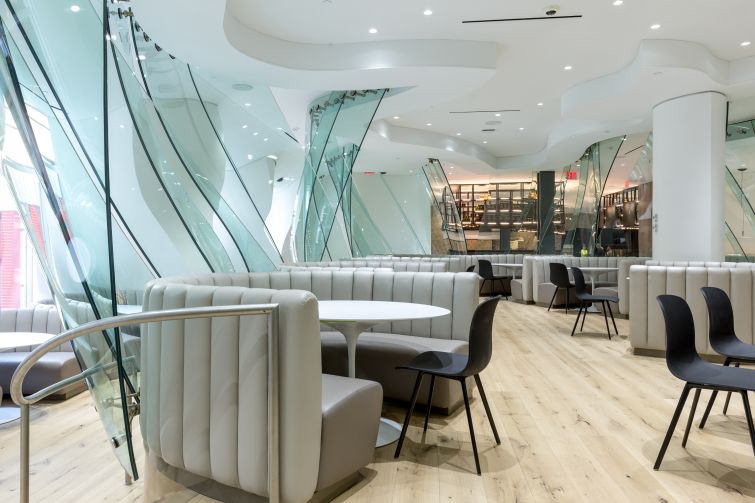 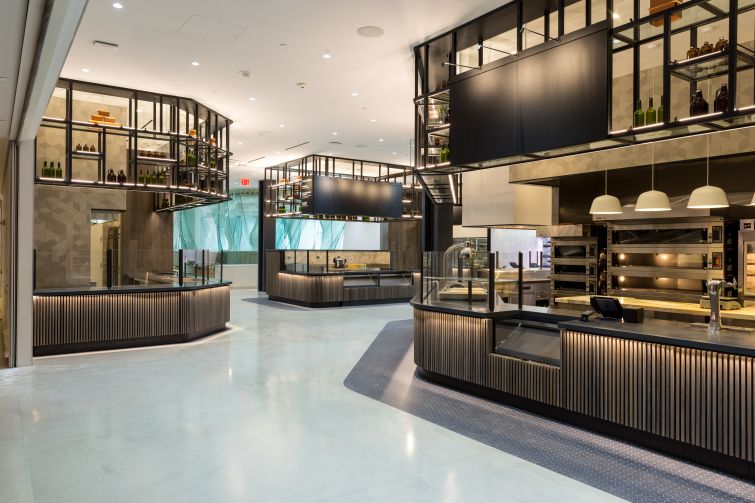 The Claus Meyer run food hall at 4 Times Square will feature six independant stations for guests to choose from, including a bakery and grill. Photo: Melissa Goodwin/For Commercial Observer 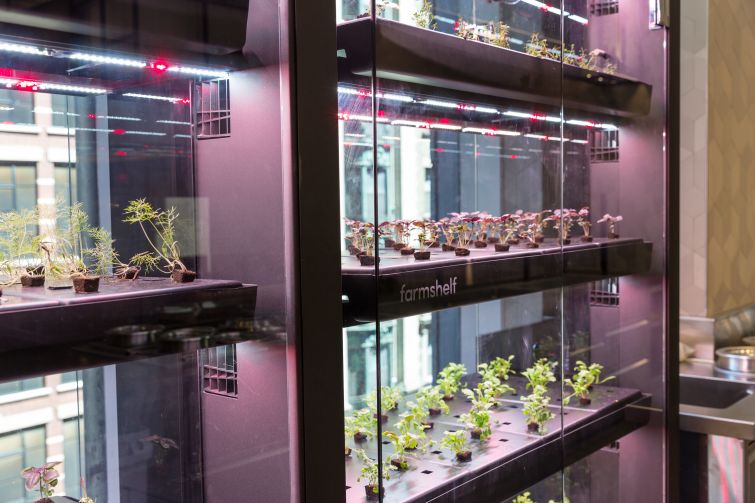 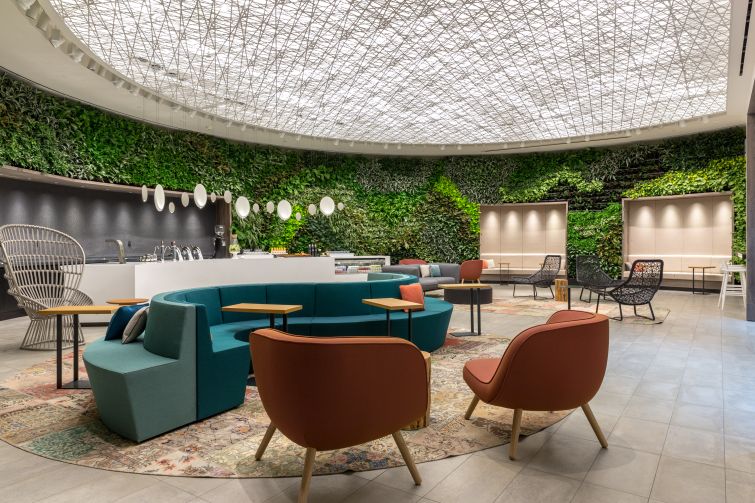 "The Green" room on the amenity floor at 4 Times Square features a 106-foot long floor to ceiling plant wall, a bar with beer and wine on tap and a variety of seating options for tenants to work at or relax in. Photo: Melissa Goodwin/For Commercial Observer 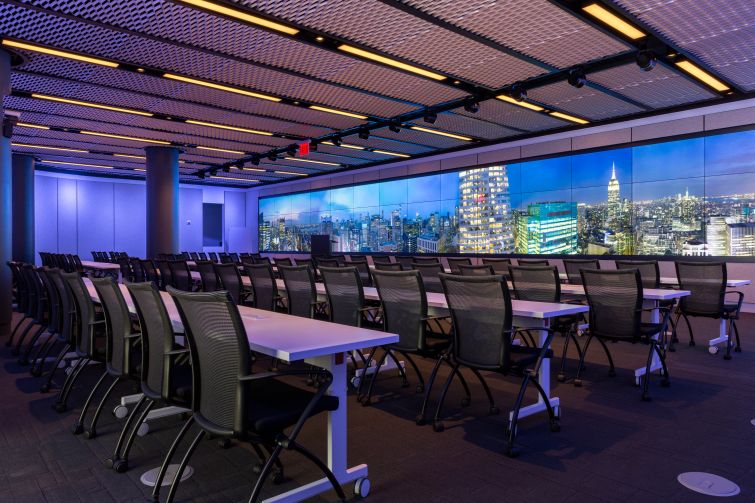 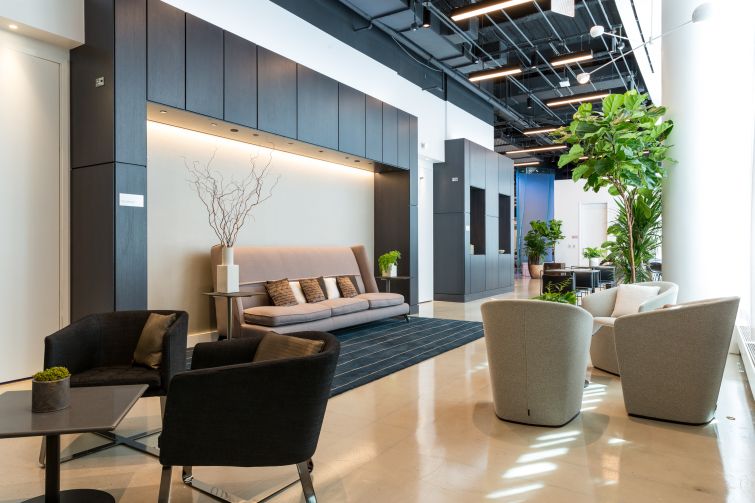 Long couches and groupings of chairs provide a variety of spaces for collegues to meet in at the Convene/Well & amenity floor at 4 Times Square. Photo: Melissa Goodwin/For Commercial Observer
Previous Next

When Condé Nast vacated its space at 4 Times Square in 2014 for 1 World Trade Center, it left behind the most famous company cafeteria on Earth.

Until recently a major question remained: what would happen to the Frank Gehry-designed canteen, where Graydon Carter, Anna Wintour and Si Newhouse Jr.,—the fabled names in journalism and magazine publishing—held court?

Its landlord, Durst Organization, saw the potential in Gehry’s first project in New York City, and instead of knocking it down and trying something new, opted to convert the cafeteria into a modern food hall called WellPlated run by renowned chef Claus Meyer as an amenity for the tenants in the 1.8-million-square-foot building.

To add to the food offerings on the fourth floor, Durst signed a management agreement with Convene—the conference and flexible workspace provider—to operate WellSaid, a collection of conference rooms and workspaces. It cost Durst $35 million to renovate the entire 45,600-square-foot floor, part of a $135 million makeover of the tower, including new entrances, lobbies, turnstyles, a new elevator system and 30 new elevator cabs.

“There is this blurring of the lines between residential and commercial,” Jordan Barowitz, the vice president of public affairs for Durst, said during the first media tour of the space ahead of its May 1 opening.

The floor has double-height ceilings throughout. Studios Architecture redesigned the kitchen and Condé Nast cafeteria. The kitchen has six stations that will serve a variety of foods, such as pastries, sandwiches, items from the grill, a raw bar (sushi and poke) and pasta. Tenants can order catering from the kitchen (and eventually, individuals will be able to pre-order food from a Convene app). Two of the stations will feature rotating cuisine.

In an effort to enhance the sustainability of the space, Durst, which is a part-owner of McEnroe Organic Farms, will send waste from the kitchen up to the farm for composting, and take vegetation produced from the farm to use in the Well& space. And there is a “green shelf”—a place to grow edible plants indoors—so cooks have access to fresh ingredients.

Tenants grab their grub and dine in the cafeteria area in chic curvy glass booths designed by Gehry.

The room has been redone in a lighter color scheme. The original blue-ish gray titanium walls and the bright yolk-yellow table tops were replaced with white plaster and tables, respectively. And the laminate flooring was swapped out for American white oak floors.

Past the cafeteria there is another room, called “The Green,” which features a large bar for breakfast and evening soirees, and a massive 106-foot long green wall with 2,200 plants and 12 species designed by by Blondie’s Treehouse. The greenwall has a watering system and special lights for the plants, and each shrub sits in its own pot so Durst employees can easily install and remove elements.

The Convene side of the floor features space for 480 people and was designed by the company’s in-house staff. The style is contemporary and stylish with hotel-like amenities scattered throughout—like wooden walls and shelves, and massive curtains over the windows overlooking the Knickerbocker Hotel. It also houses a grove of plants and a variety of sofas and individual chairs so people can work in various formats.

“More people are going to denser offices now. People are jammed on top of each other and frequently they need a place to escape—to get up from their desk and get a cup of coffee, refresh and work in a different environment,” Barowitz said. “These spaces allow the tenant to have an efficient layout and floor plan but provides their employees the amenities and work environment that they need to be competitive.”

Convene offers three conference rooms, ranging in size from 900 square feet to 2,400 square feet. And there is an conference center, named after Bryant Park, that can accommodate 189 people. It has a 46-foot long, LED screen from Planar Systems, the maker of large video scoreboards for sports stadiums and a variety digital displays for organizations. The enormous screen is actually composed of nearly 50 smaller ones.

Working is fine and all, but we imagine the employees are looking forward to a Durst Super Bowl party next year using the scoreboard screens while enjoying Claus Meyer eats.