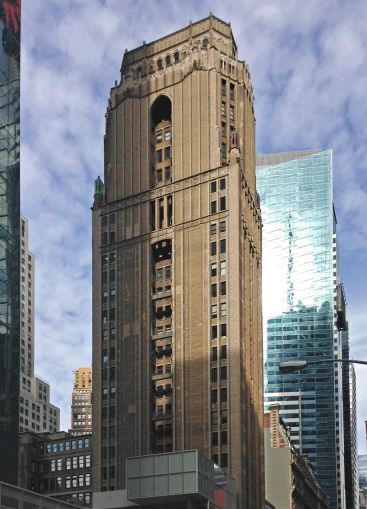 Women’s apparel e-commerce retailer MM.Lafleur is making its pop-up showroom at 130 West 42nd Street near Bryant Park a permanent arrangement after signing a long-term lease at the Midtown building, Commercial Observer has learned.

MM.Lafleur inked a seven-year deal for 5,088 square feet on the 13th floor of the 29-story, 250,000-square-foot office tower between Avenue of the Americas and Broadway, according to sources with knowledge of the deal. The company will move into the space this month from its current 4,340-square-foot location on the entire 22nd floor, where it opened the pop-up showroom last fall.

The apparel retailer, which specializes in women’s professional attire, will use the space not to display its clothes but rather hold styling appointments that its shoppers make online. It is the second such New York City location for the clicks-to-bricks brand; MM.Lafleur opened its first showroom in the city at 611 Broadway in Noho.

Arkady Smolyansky and Thomas Haughton of CBRE represented MM.Lafleur in the transaction, while a JLL team of Frank Doyle, Harlan Webster and Clark Finney represented the landlords, China-based development firm Vanke and co-owner Tribeca Associates. Representatives for CBRE and JLL did not immediately provide comment.

WeWork is presently the largest tenant at 130 West 42nd Street with more than 82,000 square feet of space, according to CoStar Group. The coworking giant signed a lease to take more than 64,000 square feet at the property early last year.