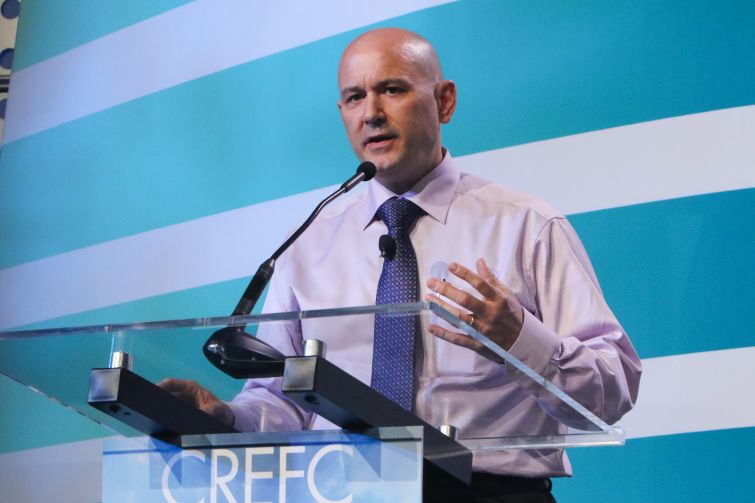 CREFC’s annual conference at the Loews Hotel in Miami kicked off with an overview of how the CMBS market has been faring, courtesy of Eric Thompson—Kroll Bond Rating Agency’s senior managing director. All eyes have been on CMBS with the financing source proving its competitiveness in 2017 and going up against bank and life company loans. Proof is in the pudding, and last year’s issuance volume neared $90 billion, surpassing most analysts’ expectations.

Single-borrower issuance in particular increased by a whopping 88.7 percent in 2017 year over year to $36.5 billion, while conduit issuance remained flat at $48.5 billion.

KBRA expects single-borrower issuance to remain strong in 2018. “There’s a number of factors that might contribute to that,” Thompson told Commercial Observer between panels. “Some borrowers may be seeking to lock in a better rate than they currently have, do so ahead of rising interest rates and take some value accretion out of a property. It is also anticipated that M&A activity may spur acquisitions that result in capital market financings.”

There is also a couple of dynamics going on in the single-borrower space that make it appealing to market constituents, Thompson said: “One is that while it can be a very competitive market for pricing and execution for issuers that can lead to compressed profit margins, they can pre-place a lot of the debt with investors and have a good idea of where that execution might be. Two, I think there’s a deeper pool of subordinate buyers who are willing to buy further down in the capital stack because they’re comfortable with the credit on a single asset and comfortable in looking at their basis from the perspective of owning it. Unlike in a conduit deal, if things do go bad, you have more transparency into what conditions can effectuate a change in control as there is only one asset.”

KBRA is aware of a dozen or more single-borrower transactions coming down the pipeline as the year begins and expects to see up to three CRE CLOs issued by mid-February.

At 57 percent, 2017 appraisal LTVs were at their lowest since KBRA began rating conduits in 2012, which is both good and bad. “The issue is that when you have that level of leverage CMBS is competing more with insurers and banks. Even if banks pull back because of regulatory concerns, you have more competition than you would even if you had marginally higher leverage.”

Historically a financing source dedicated to assets in secondary and tertiary markets, one interesting trend uncovered in KBRA’s research last year was CMBS’ increasing exposure to primary markets. “We found that primary markets default less than secondary markets by two to three points. When they do default, they have losses that are five points less than any other market,” Thompson said. “In the most liquid MSAs, the default rate is actually half that of other market tiers. So this is a positive credit element and a bright spot in terms of trends from prior years.”

CMBS loans in the largest, most liquid markets MSAs—New York, Boston, Washington, D.C., Chicago, Los Angeles and San Francisco—reached 33 percent in 2017, up from 28.1 percent in 2016. When combined with exposure to the next 11 largest MSAs, that percentage pierced the 50 percent level for the first time in KBRA’s rating history, reaching 54.3 percent (compared with 45.5 percent in 2016).

In his opening remarks, Thompson cautioned that, while primary market’s diverse economies can certainly withstand downturns, oversupply is always a concern to consider.

In terms of property types, 2017 was the year of the office with CMBS exposure to the asset class increasing to 39 percent. Perhaps unsurprisingly, retail exposure took a hit, dipping to 25.4 percent after averaging above 31 percent in previous years.

And while delinquency levels remain low, they are increasing. KBRA’s conduit portfolio delinquency rate reached 0.44 percent by year-end 2017, up from 0.15 percent at the end of 2016. The increase was somewhat expected given seasoning in transactions, Thompson said. Term defaults historically peaking between years four and six; the bulk of the delinquency (0.32 percent) is from the 2013 and 2014 vintages.

As one of the most buzzed-about topics at the CREFC conference, it looks like CMBS will continue to shine in 2018.