KBRA’s Eric Thompson on The Evolution of CMBS 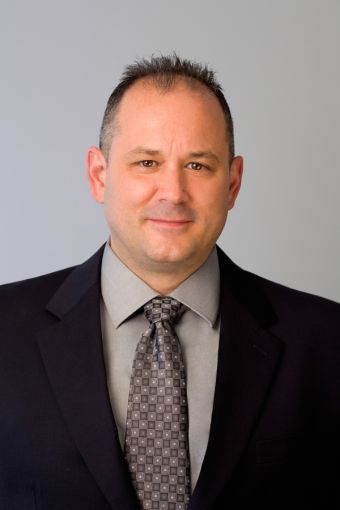 Eric Thompson has been rating commercial mortgage-backed securities for the past two decades. When he joined Kroll Bond Rating Agency in 2011 on the tail of the credit crisis, he brought his structured finance experience to the fore to build out its CMBS group and product offerings with industry concerns in mind. Thompson sat with Commercial Observer at KBRA’s office at 845 Third Avenue, between East 51st and East 52nd Streets, and discussed what’s happening from his ratings viewpoint, “in the tranches.”

Commercial Observer: Were you always interested in structured finance?

Eric Thompson: I was actually more interested in accounting and finance. I started in corporate accounting at McGraw-Hill, got interested in budgeting and profit-planning, and went to Standard and Poor’s [S&P] to do that. I saw what the S&P analysts were working on for the units I was doing budgeting for and thought, “That looks really fun and interesting,” particularly CMBS with the tangibility of real estate. I started in structured finance in 1997 and CMBS in 1998—I’ve been doing it ever since.

You were one of the first people to join KBRA.

Yes. I was one of the first to join in January 2011. It was cool because we had a blank slate. As much as I’d liked the structured finance and CMBS analysis I had been working on at S&P [where Thompson co-managed the CMBS group] there were a ton of other things I wanted to do with regard to credit modeling, how presales were treated and in offering nonrating credit opinions. There wasn’t real opportunity to do it there. I was fortunate to land [at KBRA] where effectively it was my job to do these things.

Did you see a gap in the market for the analysis you wanted to provide?

I think there was a gap in the market on a few fronts. The few presale reports that were out after the crash weren’t as timely as they could have been, they weren’t as concise as they could have been and they still didn’t drill into some investor concerns. So, that was one of the first things that we set out to do. Secondly, from the very beginning we’ve been very proactive about surveillance. I would argue that since we’ve gotten into the business, if you take out criteria-related rating actions from our competitors and just look at rating actions based on credit alone, we’ve been the most active firm, and ahead of the legacy [rating] agencies. So, I think it was a mixture of what people in the industry wanted to see, in terms of timeliness and presales to help them make decisions. With regard to both items, I think having the right team in place with the requisite experience that is also accessible to the marketplace is crucial. People should get an answer when they call, and they shouldn’t have to wait a day or two—not just investors, but issuers, too. So we try to be really accessible.

Were you ever asked to rate legacy deals?

We had many investors knocking on our door asking, and we’d say, “Well it’s kind of tough to go back.” We peeled back the onion and asked, “Well, what is it that you’re really after?” And, a lot of it didn’t come down to rating a deal at all: It came down to providing monthly analysis of all the [remittance reports], providing monthly reports, going through the servicing reports and identifying the loans of concern, forecasting losses and giving loss timings. So, we put together a group that is now housed in Pennsylvania [KBRA Credit Profile, or KCP]. They cover 750 deals that are KBRA-rated and nonrated. They’re not rating transactions, but they’ll provide color on the loans and where they see the direction of credit on the securities.

Are you surprised by the amount of CMBS loans being transferred to special servicing?

I’m not really surprised, but we’re now getting down to the bottom innings with legacy CMBS, and if you look at just conduit deals and what’s performing and not defeased, you’re down to the $30 billion range now. Again, we don’t rate legacy; it’s more what KCP does in its surveillance service, but I think some of those loans are going to do just fine. Our presales highlight previously securitized loans, and you get a feel for what’s coming into new deals from CMBS 1.0 [legacy loans originated before the credit crisis]. There are loans from CMBS 1.0 that are performing and were never specially serviced but now the borrower is looking for a loan in the current environment where there is more conservative leverage. We’ve heard analogies of borrowers that are looking for a refi on one hand and, on the other, they are shopping it for sale. Some of those loans are making it into [new] CMBS. But, others are being acquired, and the acquirers are not necessarily returning to CMBS [as a means of financing]. They’re going to an alternative lender, or the loan is maybe even ending up in a collateralized loan obligation.

Overall, how are CMBS loans performing?

From an overall standpoint, because we provide credit ratings for CMBS 2.0 [loans originated after 2010] we see stability this year going into next, particularly with high investment-grade ratings. We do expect to see some more negative activity on the subordinate securities, simply because we started rating most of our product in 2012 and most loans have defaults between years four and six—so we’re getting into that sweet spot.

Are you seeing issues on the retail side, with so many CMBS loans backed by secondary and tertiary market malls?

We are scrutinizing retail overall. There are certainly retail assets that are going to be challenged, but as with everything in CMBS, it’s a nonhomogenous asset class— individual assets matter and markets matter. We’re not of the opinion that all retail is bad. There’s still going to be a need for needs-based retail. If you’re a fourth mall in a two-mall town, that’s a problem—but fortress malls and malls in highly dense urban environments are going to do well. There are malls that are in secondary or tertiary markets, but if they’re the only mall in town they do well because they’re the center for the community. At the end of the day it comes down to a changing preference. Consumers—particularly millennials—that were focused on “things” now want experiences.

Where is the majority of the distress?

Where we see some degradation in cash flows is actually in lodging. Not as a whole but where we’ve seen a lot of construction: Manhattan, Miami, Houston—although Houston is energy market-related.

And Airbnb’s probably not helping?

We debate and talk about Airbnb all the time. At the end of the day, we can’t say that Airbnb is going to have no impact, but there’s a ton of business in the lodging market that is business-related, and for that traveler, Airbnb is not their first choice.

What lessons has the industry learned since the crisis?

Overall, I think we’re in a better place. I do believe that leverage is down. [KBRA] wasn’t rating transactions back then, but if you look at 2013 to 2015 appraisal LTVs, they were probably running in the mid-60s. Last year and going into this year the appraisal LTVs are about 60 percent. That was not the case during the boom; leverage was higher and the leverage number still had the pro forma element.

Yes, for a number of reasons coming out of the crisis. But, it’s also the case that credit ebbs and flows. The question of which point in the cycle are we in is always being asked. In 2016 when CMBS spreads blew out, credit pulled in a lot. You don’t have as many originators in play now, which reduces competition, and you have risk retention. We don’t give credit to risk retention, but we do think it’s influenced credit quality to a degree. Overall we do think there’s more discipline in the origination and the capital markets processes than there was during the crisis.

I don’t know that I’d go that far. Overall I think that [the vertical strip] has been the predominant execution in conduit multiborrower deals. Think about vertical risk retention. Let’s say that 92 percent of the capital structure is investment grade; If I’m holding 5 percent of an investment-grade execution, of which most is AAA, am I really retaining risk? Horizontal is different, but I don’t know if risk retention needed to happen.

Do you have a robust ratings pipeline for the rest of 2017?

When we developed our estimate for 2017 issuance, there were a number of factors that led us to believe market issuance would end up in $55 billion to $65 billion range. Given the velocity of issuance, we now believe that we are going to exceed the top of our forecasted range and settle in the low $70 billion area. Despite a sluggish start to the year, private label pricing volume finished the first half at $34.4 billion, up 27.8 percent year-over-year.  Volume has continued to be strong as we entered the second half of 2017; we’re currently engaged to [give final ratings] on 11 deals, which will largely post through the first or second week of August, and the pipeline of deals we are examining for preliminary feedback currently stands at 20. The active engagements include five conduit, and there are currently four conduit prelims.

Is CMBS still a competitive form of financing?

I think it is. When the pricing is right borrowers are going to go to it. Even if it’s not the first choice because of customer service, pricing and structure matters a lot.

How can customer service be improved?

Industry organizations like CRE Finance Council can re-energize efforts around borrower education, and I think that to the extent it means looking back at what CMBS offers, as an industry there’s room for improvement. Borrowers need to know who to contact if they have a lease approval or an assumption of their loan that they want to effectuate.  And if you default, it’s a problem.