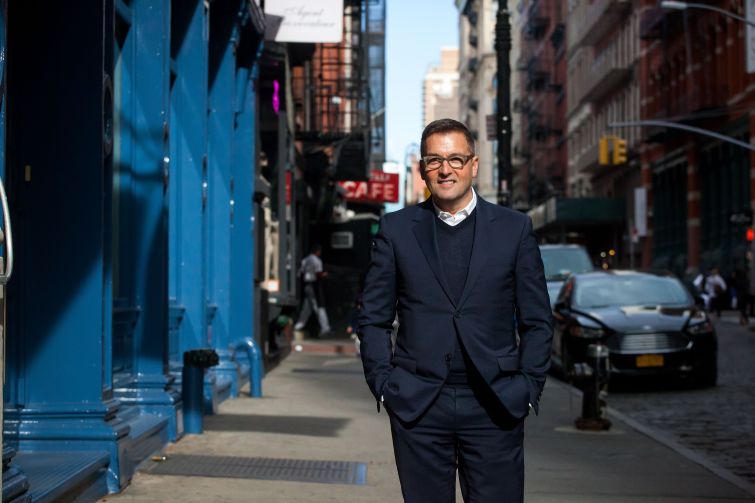 Joel Isaacs likes to feel the connection with his clients.

“I found commercial real estate to be a tough business when I was in my early 20s—very competitive, tenants weren’t loyal—and then I started working with fashion companies,” Isaacs, the head of Soho-based Isaacs and Company, said over lunch at Lure Fish Bar, seated in the private dining room (a favorite of rocker Jon Bon Jovi). “I felt like I had more to talk to them about.”

Isaacs, 56, walks the walk when it comes to these clients; he buys at least one piece of merchandise from a client’s new shop. When it comes to his client Italian outerwear company Herno he has more like six (one of which he was wearing that day).

After lunch, Commercial Observer and Isaacs stopped in the Herno flagship store, which opened this summer at 95 Greene Street (Isaacs and one of his salespersons represented the brand in the 1,350-square-foot lease). And then Isaacs and CO checked out The Webster, the Miami luxury multibrand fashion destination’s just-opened store spanning the entire 12,000-square-foot, six-story property at 29 Greene Street. A personalized tour happened to be underway, so CO and Isaacs tagged along to learn about the highly designed store—with its VIP floor including terrace.

“There is definitely a customer today for a well-edited multibrand environment, especially one that incorporates good art,” Isaacs later said of The Webster’s new shop.

As retailers adapt to the changing shopping environment, they are bringing multiple concepts under one roof to keep customers longer. This can often be achieved by bringing in a food and beverage concept. (He cited Tiffany & Co. as a great example of this with its first foray into dining at its Fifth Avenue flagship last Friday. He called the move “brilliant.”)

Isaacs lives with his partner of nearly nine years, Greg Flood, in Chelsea with their dog Stella, a rescue mutt; the couple also works together. Flood started at Isaacs and Company three years ago on the brokerage side. He is one of the 10 salespersons and brokers at the company, which Isaacs said is “not a volume shop.” In 2017 the company has closed 37 deals, 21 of which Isaacs was involved in. The company does 50-50 landlord-tenant representation with 80 to 85 percent of its deals in retail and 80 to 85 percent of them in New York City.

The Long Island, N.Y., native started his company as a solo entrepreneur in 1991 after working as an office broker on the tenant rep side at what was Williams Real Estate and then at Seth Miller’s Aegis Realty Management Company. His first major national account was Italian leather goods and fashion brand Prada, which he represented exclusively in North America for 16 years starting in 1994. He has done deals for a variety of brands from Tod’s to Marc Jacobs to Le Labo to Nespresso to Absolut Spirits.

Commercial Observer: How’d you get into the real estate business?

Joel Isaacs: I went to Emory University. I thought I wanted to be a dentist. When I was a kid, my dad was an accountant. And he and my mom used to pull my sister and me out of school for a week in May, and we would go to Miami Beach for the CPA convention. This was in the 1960s. So I have a cousin who’s quite old now who was a pretty prominent periodontist in Miami Beach. He had a gold Mercedes, and the license plate said, “Gums.”

We would always go to visit him at his office and he always had the latest gadgets. And, he had this sink where you put your hands in it, you broke the electric beam, and the water started running. I was fascinated by the gadgets, and I know that is why I thought I wanted to be a dentist. I started thinking, do I really want to be looking in people’s mouths all day for my career? And I decided I would take some courses in the undergraduate business program and one of them was real estate and the rest is history.

How did you shift from pure office representation to retail, with an office component?

I was doing office on the tenant rep side. [Miller], my boss at the time, said there was an assemblage being put together on Fifth Avenue and 56th Street and the tenants in the building were all going to have to move. So I went, and I canvassed the buildings, as you did back in the 80s, where you took a pad and a pen, go up to the top floor and make your way down and talk to all the receptionists. With security after 9/11, you can’t do that anymore—now we have many other ways to do it, especially the internet.

There happened to be two companies at 714 Fifth Avenue that were menswear companies. There has always been a lot of menswear showrooms in that area, 55th Street between Fifth and Sixth, 56th Street between Fifth [Avenue] and [Avenue of the Americas], and so I canvassed these two companies—they were friends. They wanted to move and be in the same building, so I ended up moving them further down Fifth Avenue to 601 Fifth Avenue. One of the companies was the showroom representative for Hugo Boss, which didn’t have a business in the United States yet. Hugo Boss ended up signing the lease for his showroom. And the other company was a company called Lazo that did ties and shirts. And I got a taste for working with fashion companies.

For me, it was much more enjoyable as a gay 25-year-old who wasn’t really out of the closet yet because I was kind of fighting it because it was the time of AIDS. And they would give me clothes. It made me think, “Wow, this is something I should pursue, just working focusing on industry as opposed to geography.”

What are some of your recent deals?

[Greg Flood and I] did an [office relocation] deal with the company that makes The Macallan scotch—25,350 rentable square feet at 18 West 24th Street [a.k.a. 27 West 23rd Street]. That closed in September. They are building now. We repped the tenant, called Edrington, based in Scotland. They had much smaller offices at 150 Fifth Avenue.

Alo Yoga at 96 Spring Street. It was me, David Baker and Josh Lewin. It was a retail deal, and we represented the landlord Midwood and McDevitt represented the tenant. They took possession Nov. 1. It was for a total of 14,500 including the ground [floor], second [floor] and basement.

And with Away [an online luggage company that took space at 10 Bond Street], I was involved in bringing the assignment, so you can say it was me and David Baker. We represented the landlord, the Shnays. Their company is SK Development. It’s 1,000 square feet. I’m going to say they opened in September.

Prada was your first big national client. You working with them today?

I did all of their real estate for 16 years…until 2010. I can’t say that I am their exclusive broker. Now they’re huge, and as is typical with these groups, they don’t sign on the dotted line necessarily.

How did you land that exclusive?

Canvassing. Cold calling. I tried to get in with Prada probably for three years before I connected with the right person at the right time. A lot of what we do is timing and persistence.

Do you at shop brick-and-mortar stores or online?

I shop 99.9 percent brick and mortar. The only things I buy online are not clothing. I can’t buy clothing online. Or shoes. I want to try them on.

What do you think is going on with retail rents?

That’s actually a good subject. So, we have seen 10 to 50 percent declines in rents.

Where are you actually seeing dramatic drops?

Are those the most dramatic in Manhattan?

Yeah, because they were also two of the highest ones. In Soho, the east-west streets, Prince and Spring, have always been the most expensive in the heart of Soho, and the asking rents last year were $1,000 a foot or sometimes more. But now we’re seeing [taking] deals on Prince in the $600s [per foot] to low $700s [a foot], and we’re seeing deals on Spring in the $500s.

What are those numbers on Madison and Fifth Avenues?

On Fifth, where landlords were asking $3,500 to $5,000, we haven’t really seen a deal since Nike. But I think the next deals you may see on Fifth are going to be maybe $2,000 from Saks to Apple or Saks to Bergdorfs.

When you say landlords were asking those numbers, was that last year?

They were even asking that early this year. Now a lot of landlords are saying, “We don’t have an ask.”

What about on Madison Avenue?

This is the thing—I think it’s all good for everybody. The tenants put the brakes on. Nobody was doing anything because the rents were too high. Something had to change. And there are a lot of articles about pop-ups, but in addition to pop-ups, we’re seeing two years, three years, five years and 10-year deals. In 2017 in the beginning of October, I feel like everything changed for the better because rents had come down, the landlords were sending out the right message, and the tenants are coming back to the table.