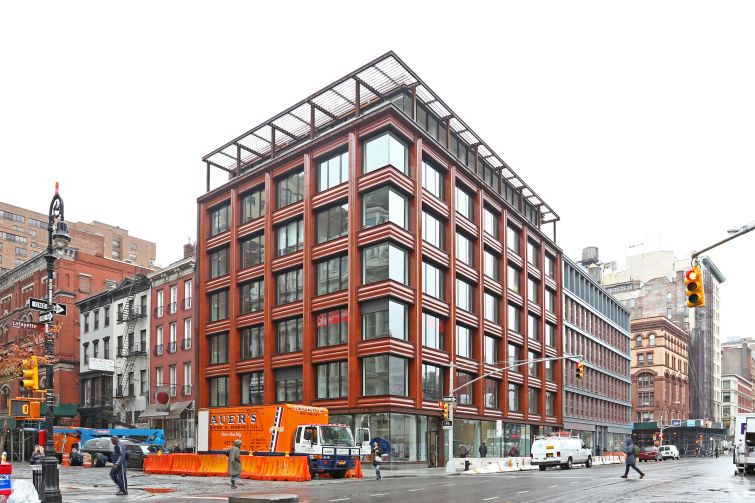 Online luggage retailer Away is opening its first permanent brick-and-mortar location at 10 Bond Street in Noho after agreeing to take nearly 2,700 square feet of space at the base of the luxury residential building, Commercial Observer has learned.

Away signed a five-year deal, with an option for an additional five years, for the location at the seven-story, 11-unit boutique condo between Lafayette Street and Great Jones Alley, which was designed by architect Annabelle Selldorf and completed last year. Away will occupy 1,290 square feet of ground-level retail space and an additional 1,392 square feet of lower-level storage space, for a total of 2,682 square feet, according to sources with knowledge of the transaction.

The e-commerce startup, which was founded in 2015, will relocate later this summer from its current pop-up store at 39 ½ Crosby Street in Soho, where it has occupied around 1,000 square feet since October. The retailer previously had another pop-up location at 325 Lafayette Street, not far from its new permanent home.

Asking rent in the deal at 10 Bond Street was $350 per square foot for the ground floor, or $37,500 per month, sources said. Christopher Owles and Matthew Girard of Sinvin Real Estate represented Away, while David Baker of Isaacs and Company represented landlords SK Development, Ironstate Development and the Chetrit Group.

Brokers on both sides of the transaction confirmed the deal. Girard told CO that Away’s new permanent space “is a bit more spacious and will include a small cafe component for their customers.”

Yoga clothing startup YogaSmoga had previously agreed to take the retail space at the base of 10 Bond Street, signing a lease in 2015 while the building was still under development. But those plans were derailed by YogaSmoga’s Chapter 11 bankruptcy filing late last year, which saw the company renege on its commitment to the space.

“[YogaSmoga] had some issues; it seemed the yogawear and activewear space got very crowded suddenly,” Baker told CO. “We’re happy to do a deal with Away. Even though they’re a startup, we felt the uniqueness of the product was compelling enough to make a deal.”

The other retail tenant at 10 Bond Street is Italian menswear brand Boglioli, which opened its first U.S. store at the location last year.