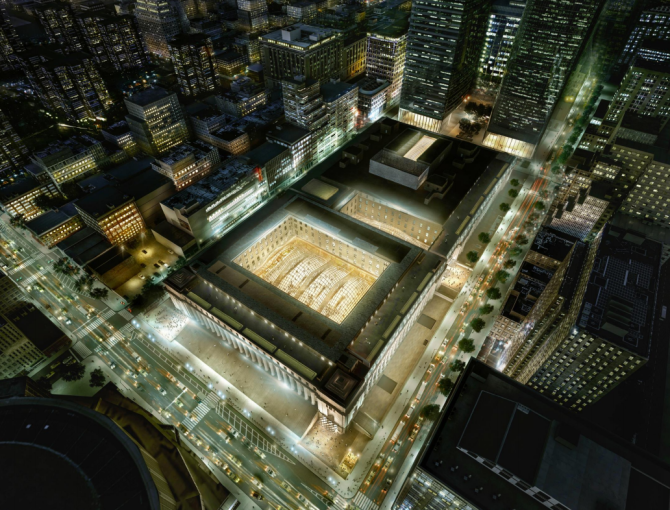 Vornado Realty Trust’s redevelopment of the James A. Farley Post Office Building into the new Moynihan Train Hall is “front and center” in the West Side of Manhattan’s bid to house Amazon’s new HQ2 headquarters, Vornado said on its third-quarter earnings call today.

Vornado, which is redeveloping the former post office building with partners Related Companies and Skanska, highlighted the project’s 730,000 square feet of office space and 120,000 square feet of retail offerings in submitting to the city’s pitch to host Amazon—which has sent municipalities across the country into a sweepstakes to host the Seattle-based e-commerce giant’s second North American headquarters complex.

Steven Roth, Vornado’s chairman and chief executive officer, said the company was “pleased” to see West Side included in the New York City Economic Development Corporation’s proposal to Amazon as one of four city neighborhoods that could accommodate HQ2 (the other three being Lower Manhattan, Downtown Brooklyn and Long Island City, Queens), with the city touting the area’s robust transit offerings and ample office space in the Hudson Yards, Penn Plaza and Midtown West areas.

Roth noted that Moynihan Train Hall would be able to meet Amazon’s “near-term needs” for roughly 500,000 square feet of office space—though whether it would be able to provide that space by next year, as indicated by Amazon, is uncertain given the project’s 2020 targeted completion date. But Amazon will eventually require up to 8 million square feet of office space for HQ2, and Roth said that it would have “significant room to grow in the existing buildings and development sites we own in the Penn Plaza district.”

He mentioned how Vornado’s senior management team visited Silicon Valley this past summer “to understand the nature of what these campuses are”—citing Facebook’s Frank Gehry-designed, roughly 10-acre headquarters as a “one-story building [with a] 450,000-square-foot footprint,” as well as Apple’s similarly sprawling, 820,000-square-foot headquarters. Both facilities also feature sizable outdoor, park-like spaces.

Moynihan Train Hall, Greenbaum said, is “truly unique” in its “ability to deliver a horizontal campus in New York, with great roof deck space in the heart of the city with views all around.” But he added that regardless of “whether New York wins the HQ2 race or not, Amazon will have a long-term significant presence” in the West Side “for years to come,” with the company having committed to large blocks of space at Vornado’s 7 West 34th Street as well as Brookfield Property Partners’ Manhattan West development.

On a broader scale, Vornado reported a bullish outlook for its core New York City office and retail assets. It cited more than 450,000 square feet of office leases across 33 separate transactions signed at “record-breaking” average starting rents of $83 per square foot, as well as 97 percent occupancy across its city office portfolio.

Roth described demand for New York City office space as “robust” and coming from a diverse cross-section of industries. Greenbaum noted that office-using employment in the city remains strong and will be able to “absorb the new [office] supply coming online in the next five years,” with the financial services sector having “finally reached its pre-financial crisis level” of employment in the third quarter.

Greenbaum said Vornado has a “negligible amount” of office lease expirations planned over the remainder of the year, with the REIT’s 1 Penn Plaza comprising “over a third of our lease expirations over the next two years.” The company is currently “finalizing our plans” for an ambitious repositioning of the office tower, which Greenbaum said is expected to commence next summer.

Roth also discussed 666 Fifth Avenue in Midtown, which Vornado co-owns with Kushner Companies and which has drawn much attention this year due to the property’s uncertain financial future (as well as its ties to former Kushner Companies head and now-Trump administration senior adviser Jared Kushner).

The building, while located on a “very attractive piece of real estate,” is “over-leveraged,” Roth said, acknowledging rumors “about tearing the building down and doing all manner of fairly grand development schemes.” But he labeled such ambitious plans as likely “not feasible,” adding that the property will probably remain in its current state as an office building via capital improvement plans that he described as “a work in process.”

Vornado also leased around 38,000 square feet of retail space across its Manhattan portfolio in the third quarter, with the most notable deal being Sephora’s 16,000-square-foot relocation to 1535 Broadway in Times Square. Greenbaum said the company is also in talks “for another flagship lease with a major national retailer for the remaining 12,000 square feet” of retail space at the property’s base.

“Our upper Fifth Avenue and Times Square [retail] assets are buttoned up for term with great credit tenants,” Roth added, noting that the company has only one lease expiry in its Manhattan high street retail portfolio coming in the next five years—fashion retailer Massimo Dutti’s location at 689 Fifth Avenue, which is due to expire in 2019 “at below-market rent.”

On the acquisitions and dispositions front, Roth said Vornado has identified roughly $1 billion in assets that it plans to sell in the coming years, excluding residential condominium sales at its 220 Central Park South tower in Midtown.

The 75-year-old Roth also acknowledged that he had heart bypass surgery in August—a procedure that raised questions about the publicly traded company’s future leadership and succession plan.

But the Vornado head attempted to dispel concerns about his health and the company’s leadership, saying that he is “now better than new, and back to work.”