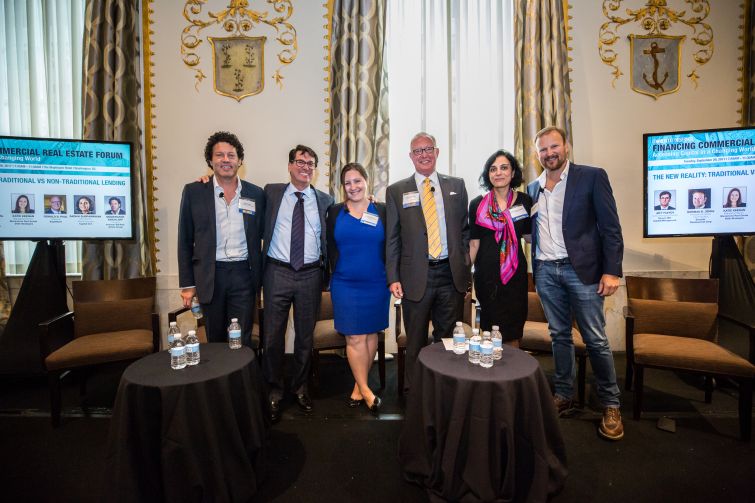 It’s not everyday that you spend your birthday with 250 industry friends, but if anyone should be placed on stage on his birthday it’s probably Simon Ziff. As moderator of Commercial Observer’s “The New Reality: Traditional Versus Nontraditional Lending” panel at CO’s Financing Commercial Real Estate Forum in Washington, D.C., on Tuesday, the president of Ackman Ziff was put to work refereeing a lively conversation between lenders from both sides, who discussed the opportunities that are drawing their dollars.

There’s no doubt that alternative lenders have filled a significant gap in the market, financing projects that banks won’t, or can’t, due to regulatory restrictions and capital requirements.

As a result, borrowers have a myriad of options to get their projects financed.

Norman Jemal, principal and senior vice president of Douglas Development Corporation (and the only borrower on the panel), said “There’s a lot of capital out there, it’s just a matter of finding the right vehicle.” Jemal said he sees tremendous appetite from lenders, essentially because the fundamentals are solid. “Lenders are hungry for loans,” he said.

Katie Keenan, a managing director at Blackstone Real Estate Debt Strategies, said that Blackstone is finding opportunities where the banks aren’t lending—construction loans, larger deals—and also in locations and sectors that are being negatively painted with a broad brush, such as Houston retail. “When the fundamentals are good, we lean in,” she said.

One place Blackstone is leaning in, hard, is creative office redevelopments on the West Coast. Keenan said that the lender has an appetite for older, industrial buildings where the borrower has an interesting plan and vision to meet future tenant needs.

High Volatility Commercial Real Estate regulations, part of the Basel III capital requirements, has certainly resulted in alternative lenders picking up the slack on construction loans. But that’s not to say that traditional lenders aren’t still making them.

Sadhvi Subramanian, the mid-atlantic market manager for Capital One, said that her bank is still active in the construction lending space—although its pricing has increased from last year. EagleBank has also done “ a lot of construction lending,” said Ron Paul, its chairman, with C-Class projects that can be renovated to B-Class properties piquing its interest.

Jeff Fastov, the senior managing director at Square Mile Capital Management, said that his firm will do value-add lending at 75-80 percent loan-to-value, jumping in where the banks leave off. When it came to the subject of pricing, Fastov said it changes depending on product.

“We think that half of the [roughly 1,300] regional malls will go away. So the good news is that the other half will still be there,” said Fastov. Square Mile hasn’t shied away from the right retail opportunities. It provided a $19 million loan to RedSky Capital to refinance debt on a mixed-use property in Williamsburg (which included high street retail) in 2016l and was recently involved in a $20 million horizontal risk retention piece in the Del Amo Fashion Center near LAX airport—a 2.6-million-square-foot mall owned by Simon Property Group and J.P. Morgan Investment Management.

In terms of other asset classes, Square Mile also has a penchant for student and senior housing. “As long as we understand it from an equity standpoint, we’re happy to go lend on it,” Fastov said.

And although there are undoubtedly many alternative lenders fighting for apiece of the pie right now, Fastov said he feels that the competition is largely “held in check,” with not many new entrants in the mix. “The stability of the competitive set is very surprising to me,” he added. “It’s consistent—not overcooked with too much liquidity.”

That said, seeing as the big, commercial banks tend to have long-standing relationships with clients and rely on relationship-banking,  “either you’re in the in-crowd or you’re not,” Fastov said. “Unless [a borrower] wants more leverage than Wells Fargo is willing to give, we’re wasting our time.”

Whether you’re a traditional lender, an alternative lender or a borrower, we’re “walking into a period of caution,” said Paul, and even a little hiccup in the market could cause some pain. He advised that caution be exercised in the product borrowers are buying, and the loans that are made.

Keenan said the real change to be aware of is how people are using space. “People got caught flat-footed with Amazon,” she said, referring to the e-commerce giant’s monopolization of the retail sector and, seemingly, beyond. Even though most of the loans Blackstone provides have 3 to 5 year terms, the goal should be to stay ahead of the game and address tomorrow’s demand, she added.

In addition to another trip around the sun, Ziff has plenty to celebrate. Ackman Ziff recently closed three construction deals in a week, including a $163 million student housing deal at Temple University in Philadelphia (with an alternative lender), a $125M speculative office transaction in New York City’s meatpacking district and the financing of a mixed-use project in New Jersey (with three more deals added to the pipeline last week, Ziff said). A very happy birthday, indeed.