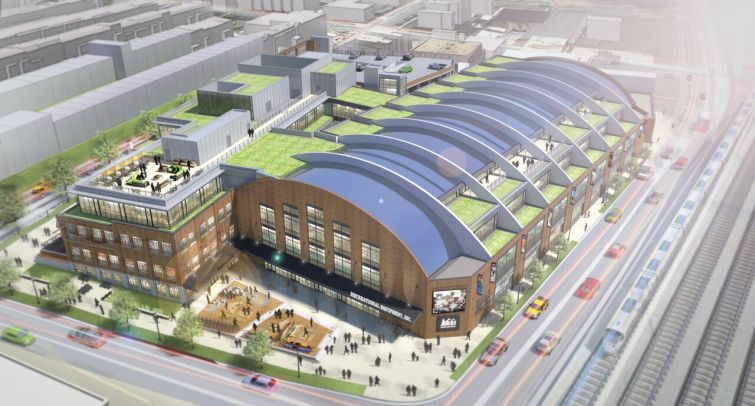 A rendering of the Uline Arena (Image: Douglas Development). danibalbi

The financing will be used to fund about 67 percent of the Uline Arena redevelopment project in D.C.’s NoMa neighborhood. The Natixis loan features a three-year term with two one-year extension options.

The site is located just next to the NoMa stop on the metro, at the intersection of Delaware Avenue NE, M Street NE and 3rd Street NE. Once completed, the mixed-use project will feature 70,000 square feet of retail, 174,000 square feet of office space and a four-level parking garage.

Douglas Development acquired the 2.5-acre property in 2003 for $6 million, according to D.C. property records. The site houses four structures, the two most historic being the arena and the nearby “ice house.” Originally, the facilities were used as an ice skating rink and accompanying ice manufacturing facility.

The arena is also known for hosting The Beatle’s first American concert. The arena, ice house and two other structures, which are mostly used as parking facilities, are all part of Douglas Development’s conversion project.

Currently, outdoor and fitness retailer REI is signed on as a tenant. “We will likely lease three to five more retail tenants,” Mr. Turner said. “Office could vary from one large user to several 20,000-square-foot to 50,000-square-foot tenants.”

Construction of the office and retail center is slated for completion in September 2016.

A Natixis spokesman did not respond to inquiries by press time.