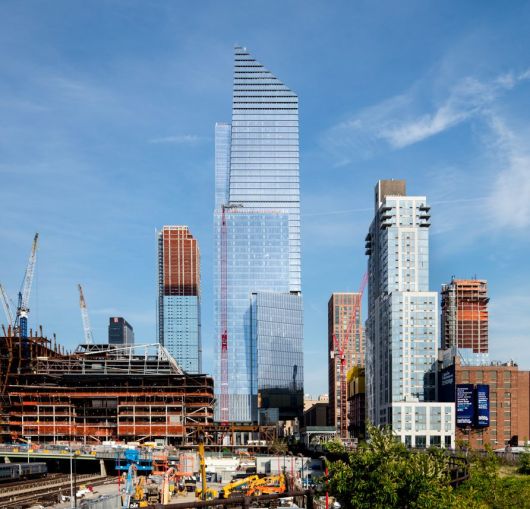 Guardian Life Insurance Co. of America has agreed to sublease more than 148,000 square feet of space from Coach Inc. at 10 Hudson Yards on Manhattan’s Far West Side, the luxury handbag retailer disclosed in a regulatory filing today.

The deal, which was signed Wednesday, will see the insurer take three floors comprising 148,318 square feet of office space at the 52-story, 1.7-million-square-foot skyscraper, which straddles West 30th Street between 10th and 11th Avenues, according to a U.S. Securities and Exchange Commission filing.

While Coach did not disclose when Guardian Life will take occupancy of the space, the rent commencement date is February 2019 and the sublease will run through June 2036, per the filing. The insurer has agreed to pay a monthly base rent of approximately $790,000 from March 2019 through June 2019, with that number due to increase to a range between $1.1 million and $1.3 million from July 2019 through the end of the sublease.

In addition, Coach said that it has agreed to reimburse Guardian Life for subtenant improvements to the tune of $80 per square foot, or around $11.9 million in total—though those figures are subject to a deduction of $10 per square foot, or $1.5 million, “for work previously performed by or on behalf of” Coach.

The filing also noted that the landlord at 10 Hudson Yards—a partnership between Related Companies and Oxford Properties Group—had “delivered its consent to the sublease.”

Guardian Life will make the move to 10 Hudson Yards from its current headquarters at 7 Hanover Square in the the Financial District. As Commercial Observer reported last month, the insurer has tapped the Cushman & Wakefield investment sales team of Douglas Harmon and Adam Spies to market the 27-story, 846,000-square-foot office building, after Guardian Life activated a $147 million purchase option on the property—an option that was agreed as part of the insurer’s 20-year, full-building lease on 7 Hanover Square, which it signed in 1998.

The Real Deal reported last month that Guardian Life was in talks with Coach to sublease “a large chunk of space” at 10 Hudson Yards, which the publication reported would be in excess of 100,000 square feet.

Coach paid $530 million in 2013 to acquire a roughly 740,000-square-foot portion of the office tower, comprising its seventh through 24th floors. The company subsequently agreed to a $707 million sale-and-leaseback deal last summer with Allianz Real Estate, a division of German financial services giant Allianz SE, which saw Coach divest its ownership interest in 10 Hudson Yards while inking a 20-year lease for its office space at the property.