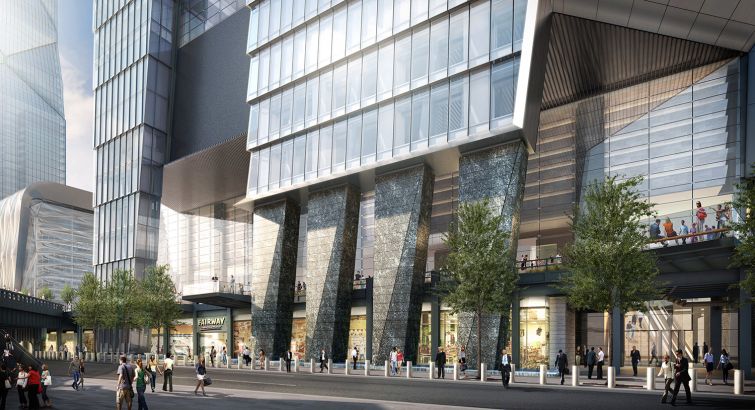 Allianz SE has purchased a major stake in 10 Hudson Yards, the first of three major office buildings that Related Companies and Oxford Properties Group are developing on the Far West Side, the developers announced in a press release.

The private equity firm paid $420 million for a 44 percent stake of the tower, according to Bloomberg, which first reported news of the transaction. It bought the 40 percent share owned by luxury handbag company Coach, as well as a 4 percent piece owned by Kuwait Investment Authority.

As part of the new ownership arrangement, Allianz is a borrower on a $1.2 billion mortgage on the skyscraper provided by Goldman Sachs and Deutsche Bank. The recapitalization valued the fully leased Manhattan building at $2.15 billion.

“The momentum at Hudson Yards is undeniable,” Related Chief Executive Officer Jeff Blau said in a statement. “The recapitalization of 10 Hudson Yards showcases the global appeal of Hudson Yards and is further evidence of the value we have created through our mixed-use strategy focused on best-in-class architecture and planning and meticulous execution.”

Coach, which occupies the lower half of the 52-story tower, announced in its own press release that it was doing a 20-year leaseback on the property. The company was paid roughly $707 million in yesterday’s deal, the release indicates. Further terms of the new agreement were not immediately clear. A spokeswoman for Coach, which is in a quiet period, did not immediately return a request for comment.

The leather goods company originally paid $530 million in 2013 for a 40 percent stake in the 1.7-million-square-foot tower at the corner of West 30th Street and 10th Avenue, as Bloomberg reported in November 2015, when Coach began to shop around its share of the property to make a profit from its investment. Until yesterday’s sale, Coach owned the floors occupied—the seventh through 24th, or 738,000 square feet—making it one of the first tenants to commit to the building. Employees of both Coach and the recently acquired shoemaker Stuart Weitzman have offices in the building, and began moving in this May.

“We are very pleased to monetize our investment in Hudson Yards, where we were the first company to commit to the project and will be the largest tenant in the new building,” Victor Luis, the chief executive office of Coach, said in prepared remarks. “We have long been part of this neighborhood and we are thrilled to be part of the new Hudson Yards development that is bringing opportunity, culture and commerce to a great part of Manhattan.”

Other major tenants at the property include L’Oreal, SAP and The Boston Consulting Group. The building became fully leased in January when Intersection and Sidewalk Labs, both headed by former Deputy Mayor Dan Doctoroff, signed a combined lease for 67,000 square feet, as CO reported at the time.