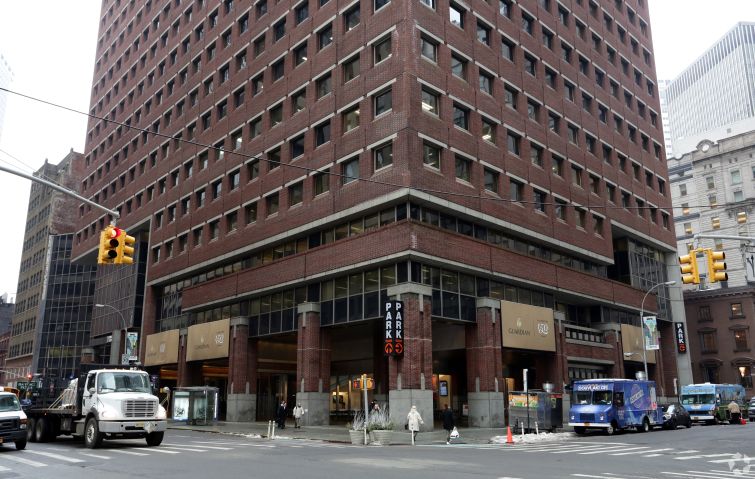 Guardian Life Insurance Company of America has tapped a Cushman & Wakefield team led by Douglas Harmon and Adam Spies to market its headquarters building at 7 Hanover Square in the Financial District, Commercial Observer has learned.

Harmon and Spies, the former Eastdil Secured investment sales brokers who left the firm last October to co-chair C&W’s capital markets division, will be tasked with finding a buyer for the the 27-story, 846,000-square-foot office building between Pearl and Water Streets. While the property has yet to officially hit the market, C&W is expected to begin the sales process after Labor Day, sources told CO.

The building at 7 Hanover Square currently serves as the headquarters for Guardian Life, which recently activated a $147 million purchase option to acquire the property from owners Milstein Properties, The Swig Company and Weiler Arnow Management Company, Real Estate Alert first reported in July.

The purchase option was a provision in a 20-year lease that Guardian Life signed in 1998 to take virtually all of the office building’s space. The insurer—which has subsequently subleased much of that space to tenants including law firm Fragomen, Del Rey, Bernsen & Loewy and online media outlet International Business Times—had until March 31 of this year to exercise the option.

Now Guardian Life is looking to flip the asset at a price—north of $400 million—well above what it is paying for the property. The purchase option gives the insurer until September 2019 to close on the $147 million deal, according to a loan-servicer report cited by REA, and sources confirmed to CO that the terms of the option provide Guardian Life and C&W with a delayed closing, giving them ample time to find a new buyer.

C&W plans to market 7 Hanover Square, with its roughly 35,000-square-foot floor plates and 12-and-a-half-foot ceilings, as ripe for a potential repositioning as a residential building—an increasingly prevalent route for office properties in the Financial District. Recent examples of the trend include Rose Associates and DTH Capital’s 70 Pine Street and several properties being converted by developer Nathan Berman’s Metroloft, such as 180 Water Street and 20 Broad Street.

Guardian Life, meanwhile, is expected to vacate its space at 7 Hanover Square as it pursues a sale of the building, with The Real Deal reporting earlier this month that the company is eyeing a deal to sublease office space at 10 Hudson Yards from luxury handbag retailer Coach.

While the insurer’s departure would raise questions for prospective buyers seeking to maintain 7 Hanover Square as an office building, the late-2019 closing date on Guardian Life’s purchase option would provide any new owner with time to re-tenant the property as it sees fit.

Harmon and Spies could look to potential foreign buyers as they seek to drum up interest in the building. At Eastdil, the pair tapped into the unprecedented wave of foreign capital that has sought to invest in the Manhattan commercial real estate market in recent years in facilitating numerous $1 billion-plus property transactions—such as Olayan Group’s $1.4 billion acquisition of 550 Madison Avenue and the Hong Kong Monetary Authority’s $1.15 billion purchase of a 49 percent interest in 3 Bryant Park.

Representatives for C&W and Guardian Life did not provide comment on the matter. A spokesman for Swig Company declined to comment, while calls to Milstein Properties and Weiler Arnow Management were not returned.