The historic theater is about to be elevated at 1568 Broadway 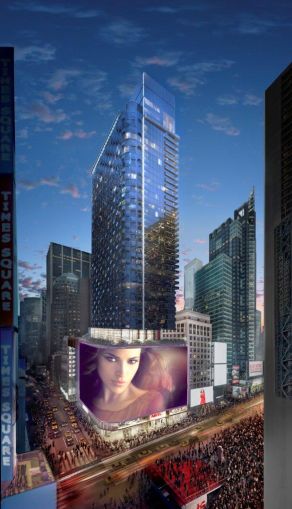 The redevelopment of the Palace Theatre at 1568 Broadway is one step closer to kicking off. L&L Holding Company became an equity and development partner in the project this month—which has an estimated total development cost of $2 billion—along with Fortress and Maefield Development. The three will now work in conjunction with the Nederlander Organization—the Palace Theatre’s owner—to elevate the theater within the Doubletree Guest Suites Times Square hotel it is housed in, and then build retail and entertainment space below it.

“We are thrilled to serve as an equity partner and developer for 1568 Broadway,”  L&L Holding Company Chairman and Chief Executive Officer David Levinson told CO. “We look forward to working in collaboration with Maefield and Fortress, and in conjunction with the Nederlander Organization, to create an amazing new mecca for the arts, entertainment, cuisine and lodging in the heart of Times Square.”

J.P. Morgan provided a $250 million senior mortgage to the development partners, according to property records filed with the city yesterday. The loan consolidates $175 million in previous financing on the hotel with a $75 million gap mortgage made by the lender. The new debt allowed for the formal acquisition of all the necessary project components, including the land and all of the signage ownership, a source familiar with the development told Commercial Observer.

How much of the project’s $2 billion cost will ultimately be debt versus equity could not immediately be gleaned.

As previously reported by Commercial Observer, Maefield acquired the leasehold interest in the hotel from Sunstone Hotel Investors for of $536 million on Dec.18, 2015, as part of the theater’s redevelopment.

The 1,700-seat Palace Theatre is currently encased its own “shoebox” structure within the Doubletree hotel. In an interview with CO last year, Paul Boardman, a partner and New York development principal for Maefield Development’s New York projects, described how the firm will elevate the Palace Theatre 29 feet above ground-level and then build 70,000 square feet of retail and entertainment in the newly formed space underneath it.

“We’re in the process of designing the most exceptional retail and entertainment space that you can envision and also an amazing ennobled entrance to the theater. That is all technically and aesthetically being designed right now, so we’re not ready to enter the marketplace formally, but there are many unsolicited inquiries into what we’re doing just because of its extraordinary location,” Boardman said, at the time of interview.

Officials at Maefield Development and Fortress did not respond to a request for comment. Officials at J.P.Morgan declined to comment.