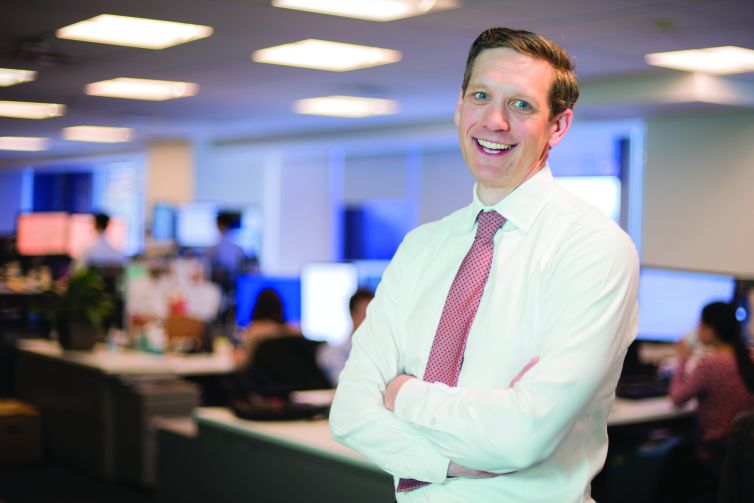 Capital One brought New Jersey-born Evan Williams on board in February as an affordable housing expert. With a focus on originating Fannie Mae DUS, Freddie Mac Targeted Affordable Housing and Federal Housing Administration loans nationally,  he has his hands full. Williams sat down with Commercial Observer in Capital One’s office at 299 Park Avenue and described some of the highlights and challenges of lending in the affordable housing space.

What’s interesting for us is that we have different capabilities. We have a commercial real estate group that’s pretty substantial and has a big focus on New York, lending on multifamily commercial real estate in general and also affordable or mixed-income housing. Within our community finance group, we focus on purchasing low-income housing tax credits and providing construction financing and permanent financing to affordable housing. Then we have our agency platforms—Fannie Mae, Freddie Mac and FHA—and that’s the piece of the business I’m trying to help grow, our agency presence.

How did you get your start in the affordable housing sector?

I started focusing on it in 2006. At that time, the company I worked for [Hunt Mortgage Group] had been acquired by Charter Mac, which was the largest tax credit syndicator in the industry. It needed someone to focus on agency lending and work through the deals on the production side. I was surrounded by all these people who had years of experience in the tax credit industry, and my task was to learn about affordable housing then bring the agency piece to it.

People always say there’s a tangible element—and that’s true—but to me it’s fun to look at the green element, and the really fun part is the people and the relationships. It’s very much an entrepreneurial industry—we’re working with owners that started their firm in the last five to 10 years to second and third generations to institutional real estate investment trusts. So you see very different dynamics in the industry, but a lot of trust and a lot of deep relationships.

Describe the trajectory of affordable housing and how you fit in as a lender.

It has a unique history. Section 8 housing has been around for a long time and was mostly developed in the 1970s and 1980s. The low-income housing tax credit program was created in 1986 and only made permanent in 1992. If you think about it, the properties developed on that program have a 30- year total restricted life, and they are usually held for an initial time of 15 years. So, a lot of the loans we’re working on today are refinancing properties that were developed or acquired and rehabbed 15 years ago. Then properties that were developed in the late 1990s are at the end of their 30-year regulatory agreement and also coming up now. So, we’ve really accumulated a large stock of affordable housing here, and at the same time, there is a focus on the sector that wasn’t there before.

It’s a much bigger industry today, and affordable housing has reached the scale where it’s a real investment class, too. There has been a greater need for it since the financial crisis, and there’s also more innovation that Fannie Mae and Freddie Mac and FHA are bringing to the table.

What are some of the challenges you face today?

There are always deal challenges, but there are fewer today because Fannie and Freddie and FHA have preferred underwriting standards and place those as a priority. They offer preferred pricing, too.  So while there are always deals that are tough to get done, we’ve got a great set of resources and the sector continues to improve.

I’d say the most direct challenge of the past year followed the election—the question of how tax reform might impact tax credits. It’s definitely a risk to consider, but what didn’t change is that there is still a pretty clear consensus on the underlying security of the asset class. There’s still support from a credit perspective, in that it’s a credit-worthy investment, and there’s still a need and want to invest in the affordable housing industry.

How has demand for affordable multifamily housing fared?

What are the deal parameters you look for today?

It’s really no different in affordable housing than it is any other type of lending. The first question is always the ownership and who we are working with. Then we look at the market strength and the stability of the property’s income—that’s where our job is hopefully easy as there’s normally a pretty dramatic discount-to-market and high occupancy at the properties, so we’re almost assured of that. The last factor is the property’s condition. Some affordable housing stock was developed in the last 10 years, but some is 40, 50 or 60 years old. It’s a question of how they were originally built, but at the same time you could have built a great property 50 years ago, and if it’s not reinvested in, it’s not going to look great today. The properties that were continually reinvested in over the years are the ones that are great assets that have a long life ahead of them.

Does New York differ from other states with regard to affordable housing lending?

New York is just a different animal. Affordable housing tends to be pretty different in each state but New York is unique in terms of the incentives, the real estate norms, the tax maintenance and the state agencies. Looking back, New York was one of the pioneers in affordable housing—you don’t have Mitchell Lama in any other state.

What’s your take on the 421a replacement?

I don’t know if I can predict how many units we’ll see as a result of it, or what the impact will be, but I think it sets a really good example—the city and state’s consensus that there is a need for affordable housing. They can put money in directly—which they do a lot of, they can provide real estate tax abatements and they can change zoning. It’s probably the most impactful way to spend money, versus direct subsidies or other sources. Clearly there are projects that will opt to extend their affordability because of the extension of the abatement, and we’re starting to have that discussion with some owners who have the option. I think it will have the desired impact.

Ultimately, where there is a way, people get it done. The city and the state in New York distinguish themselves as being competent agencies with a huge track record. So, the limits are like anything else—it’s sites, it’s money.

Fannie Mae and Freddie Mac have made a big push in terms of offering green incentives for borrowers. How does that impact your decision-making as a lender?

We’re very supportive of these incentives. Anytime there is innovation or more resources are brought to the industry it helps to get deals done. Fannie Mae and Freddie Mac both put a lot of support behind their green initiatives so that there’s a real pricing benefit there.

In affordable housing we do a lot of rehabs and also a lot of new construction. There’s always been a focus on energy efficiency where there is a development opportunity. It’s a little harder to make changes when you’ve been operating the property for 15 years. So developing those financing programs really raises the profile of the energy efficiency opportunities out there and it’s something that—even as those incentives change over time—has now been adopted by a lot of owners and operators as the way they want to maintain their buildings.

How is the rest of the year shaping up?

In terms of business generally, we’re looking at opportunities every day. For me personally, coming over at the beginning of the year it just feels like the pace continues to accelerate. Barring any huge change, I don’t think interest rates are going to change dramatically, and if there’s not some huge legislative change or fundamental difference in the market, the strength of the multifamily market seems to still be in a stable state.