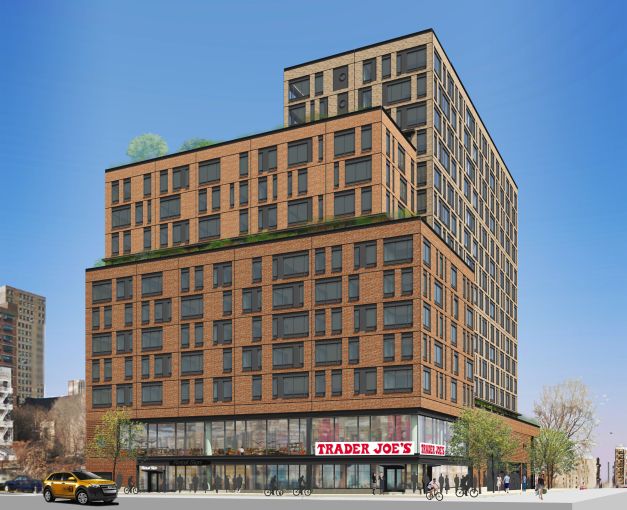 A preliminary rendering of a future Target at 145 Clinton Street.

Target is bringing two flexible-format stores to Essex Crossing on Manhattan’s Lower East Side and to a new mall in Jackson Heights, Queens.

The big box chain inked a deal for 22,500 square feet on the second floor of 145 Clinton Street, at the corner of Broome Street, The Wall Street Journal reported. The store will open in March 2018, becoming the fourth in Manhattan.

The under-construction rental building will house 211 apartments, 104 of which will rent for below-market rates. The ground floor will have a 30,000-square-foot Trader Joe’s and other yet-to-be-announced retailers.

When it’s complete, Essex Crossing will bring 1.9 million square feet of residential, retail and community space to nine different parcels near the Manhattan Bridge. The building at 145 Clinton Street is one of four Essex Crossing buildings that will be finished next year, as part of the first phase of the Lower East Side megaproject. Beyer Blinder Belle is designing the 15-story rental development, which will offer studios and one-, two-, three- and four-bedroom units.

Across the river in Queens, Target plans to open a 23,580-square-foot store at a new Jackson Heights retail complex, The New York Post first reported.

Sun Equity Partners and Heskel Group are developing the 80,000-square-foot, two-story project at 40-31 82nd Street. The pair of developers picked up the 23,430-square-foot site for $27 million in September 2016 and proceeded to knock down a long-defunct movie theater.

The development, known as the Shoppes at 82nd Street, is only a block from the 82nd Street 7 train station and sits just off Roosevelt Avenue, the neighborhood’s main commercial strip.

This Target will open in 2019, joining five others in the borough. The discount retailer already has Queens locations in Elmhurst, College Point, Forest Hills and Flushing.

The Minnesota-based retail giant plans to open 30 small-format locations nationwide this year and 130 by the end of 2019.