Exclusive Look Inside Durst’s 1 WTC Playroom in the Sky 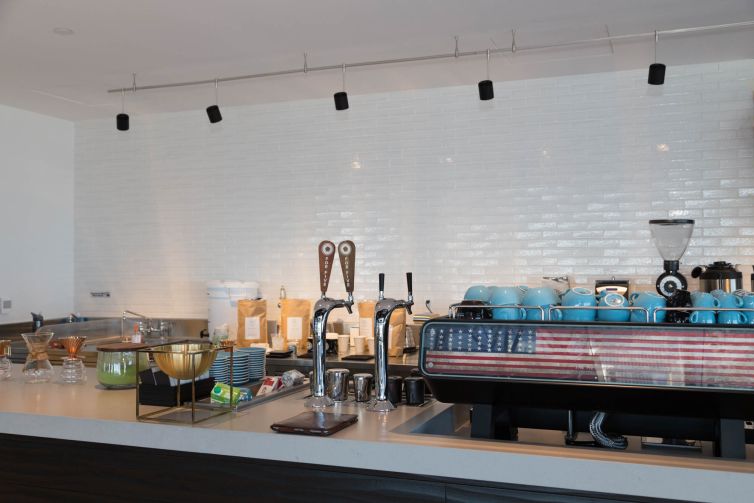 This coming Monday, tenants of 1 World Trade Center will officially be able to grab a cup of coffee and play a round of pool 64 floors above the ground.

Durst Organization this week wrapped up the final touches on the 3-million-square-foot tower’s amenity floor, which is open to all tenants in the building. While they’re not necessarily the first to undertake this type of communal space, the story of this floor dates back to the early days of the tower. Originally a sky lobby where occupants of the upper floors switched elevators, the level will now be an area for meetings, yoga, games and grab-and-go food. Commercial Observer got an exclusive first peek at what the space will look like.

Durst tapped Convene, a specialist in meeting and event spaces, to manage the 64th-floor space and the various activities that it will host. The company has already scheduled events for the space once it opens on Monday, which is available to all tenants of the skyscraper along with their guests, according to Kuznick. Along with yoga classes, meditation and exercise sessions have been put on the calendar and an Argentine tango instructor is coming in.

Durst and Convene are well-acquainted at this point. In March, meeting coordinator signed a 35,700-square-foot lease at Durst’s 114 West 47th Street between Avenue of the Americas and Seventh Avenue to open a flagship space, as CO previously reported.

“It’s been a successful partnership,” Kuznick said. “That’s why we’ve been so happy and trusting to bring them down here.”

In a statement to CO, Convene Co-Founder and Chief Executive Officer Ryan Simonetti said he was happy to work with Durst and the Port Authority of New York & New Jersey, the majority owner of 1 WTC, on the amenity floor.

“We believe that providing amenities and hospitality services to building tenants that ultimately help improve and transform the workplace experience is the future of commercial real estate,” Simonetti said. “We are thrilled to be a part of this new service offering at [1 WTC] and look forward to bringing a sense of place and community to tenants of the building.”

Kuznick said the idea behind the floor was to create a place where tenants from across 1 WTC could intermingle as well as take a break. Along with separate rooms for table and video games, there are meeting areas that can either hold one big conference for 180 people or two smaller ones that can each fit 90 people.

“We’re looking to be able to meet those needs,” she said. “This whole thing was really driven by our need in a 3-million-square-foot building to build a community.”

She added that a lot of thought went into the tenant experience. The floor’s cafe, for instance, is on the eastern side of the building in part so tenants can watch the sun rise as they get their morning coffee.

The concept for the amenity floor was born two years ago, when the building opened. Durst executives previously told CO they noticed that tenants switching elevators were having conversations and mingling. They decided to scrap plans to use the 31,288-square-foot floor as office space and instead create something for the whole tower.

Durst got approval from the Port Authority in November 2015. At the time, construction of the space as well as supporting infrastructure was expected to cost about $14 million, according to documents from the bi-state agency.

To design the space, Durst brought in Gensler to help conceptualize the amenity floor. The final result features darker colors and gives something of an older Midtown South grit to the three-year-old building. After all, the tenant base at the tower has increasingly been filled with young employees working at technology and media companies such as Condé Nast, High 5 Games and Mic.

“The sky lobby at 1 WTC is set to change the way commercial office buildings serve their tenants,” EJ Lee, a principal at Gensler and design lead for the project, said in a statement via a spokeswoman. “The millennial workforce is making us rethink what it means to go into the office and that’s influencing our designs in a significant way. The sky lobby is designed to capitalize on this paradigm shift, providing an exclusive perk for the tenants of 1 WTC to have a respite from the office that also happens to have the best views in the city.”