Delta on Prowl for $3.6B in Debt for LGA Terminal Construction 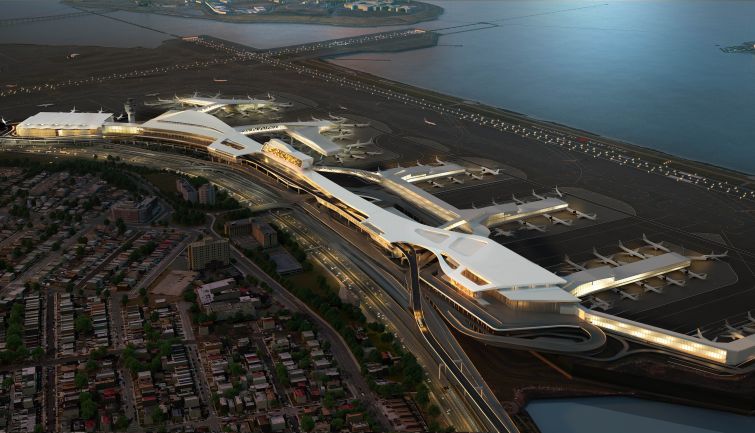 A rendering of the new LaGuardia Airport. Photo: flickr.com/governorandrewcuomo

Delta Air Lines is seeking a whopping $3.6 billion in debt for its construction of a new 37-gate terminal building at LaGuardia Airport, according to the Port Authority of New York & New Jersey.

The airline is currently renegotiating its ground lease with the Port Authority at the western Queens airport—one of the first steps in constructing a replacement structure for the existing Terminals C and D. The new terms of the ground lease include a rent abatement of up to $36.6 million, officials said today at the monthly Port Authority board meeting.

Port Authority commissioners approved that the agency enter into the new ground lease with Delta, but the airline’s project first has to be certified by the Federal Aviation Administration. Preliminary work on the new terminal should begin once that approval is done later this year, with its completion slated for 2026.

“Delta is committed to continuous investment in airport infrastructure in New York and around the world, and today’s lease approval brings LaGuardia closer to being the exceptional airport our New York customers deserve,” Delta Chief Executive Officer Ed Bastian said in a press release issued by Gov. Andrew Cuomo’s office.

Delta and a Goldman Sachs-managed fund, its partner at the airport, are investing $300 million in equity to cover the rest of the $4 billion plan, Port Authority officials said. In July 2016, the Port Authority authorized that it invest no more than $600 million to help pay for construction of the facility, roadways and buildings surrounding the new structure.

The debt will likely be issued through bonds—typically via a government entity that specializes in infrastructure projects. If so, it will be one of the largest financings of its type—significantly higher than its neighboring project.

The new central terminal, set to begin opening next year, will link to Delta’s yet-to-be-designed building by a central hall, which LaGuardia Gateway Partners is constructing.

Delta’s new ground-up facility will be closer to the Grand Central Parkway. The airline also plans to expand its existing parking garage by 500 spaces, construct a new taxi staging area and pedestrian paths to the terminal building.

The Port Authority approval came a day after Cuomo announced a $10 billion plan to upgrade John F. Kennedy International Airport. That work will include linking the passenger terminals—as well as replacing older ones—along with rerouting the roadways within the airport. All said and done, that means $18 billion in construction work will be underway at New York City’s airports at the same time—most of which will be privately financed.

Officials believe the bulk of the money for the project will come from private investment. In its draft of a 10-year capital budget, which will be voted on next month, the Port Authority has earmarked $1 billion for the JFK overhaul. Patrick Foye, the agency’s executive director, said that number could be lower but likely will not got higher.