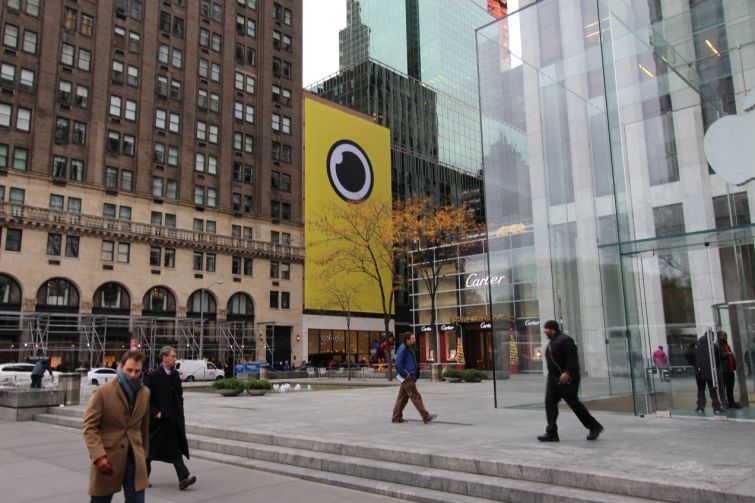 Snapchat, the short-term photo messaging app, has opened a pop-up location at the former Playboy Club. The is the first physical store for the company, which it will use to market its new picture-taking sunglasses.

The social media app will occupy the entirety of 5 East 59th Street between Madison and Fifth Avenues through New Year’s Eve, according to Snapchat’s website. The store, which officially opened yesterday, will be closed only on Thanksgiving as well as Christmas Eve and Day.

Asking rent in the deal was not immediately available, but brokers with Winick Realty Group were previously asking $14 million a year for the space.

The building includes a 5,000-square-foot ground floor that has 22-foot ceilings. Much of the nine-story structure façade has been covered with a yellow banner brandishing Snapchat’s logo. The property sits across the street from the Apple store at 767 Fifth Avenue, otherwise known as the General Motors Building.

GreenOak Real Estate and Capstone Equities put the building up for lease last year, tapping Winick’s Darrell Rubens, Lee Block and Kelly Gedinsky as well as Newmark Grubb Knight Frank’s David Falk, Danny Levine and Jason Greenstein to market the 40,000-square-foot building. The Winick team represented both the tenant and the landlord in this deal.

Rubens said this is Snapchat’s first brick-and-mortar store in which it is marketing the company’s new “Spectacles.” The sunglasses are outfitted with cameras that allow the wearers to record photos and videos of what they are seeing, which is then wirelessly uploaded to the Snapchat app.

“We have been marketing it as a stand alone creative space to showcase a brand with a retail component,” Rubens said of 5 East 59th Street. The team has been looking for “a new brand who would have a synergy with Apple.”

Snapchat has been setting up “Snapbots”—vending machines that sell the glasses, which will also be featured in this location. The company has also dropped them in recent weeks at the Grand Canyon and the Rose Bowl in Pasadena, Calif.