Construction Officially Kicks Off for SL Green’s Massive One Vanderbilt 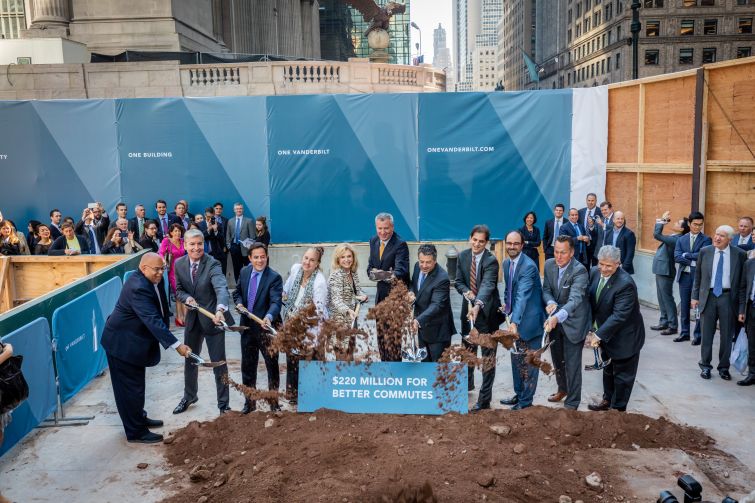 Construction officially began on One Vanderbilt, what is slated to abut Grand Central Terminal and become the second-tallest office building in New York City.

SL Green Realty Corp. executives and city officials ceremonially broke ground on the tower, which will have a roof height of 1,401 feet when it finishes in 2020. Commencing construction follows more than a year of demolition to prepare for the full-block building between East 42nd and East 43rd Streets, a rigorous rezoning process and securing $1.5 billion in financing.

“This is the kind of development we need that helps us address our core infrastructure challenges, the kind of development that the people of this city could look at and feel very good about the fact that there was something in it for them as well as for the other partners in the project,” Mayor Bill de Blasio said at the groundbreaking today, held at East 42nd Street and Vanderbilt Avenue, where the building will one day stand.

Only one tenant has been secured for the property so far: TD Bank, which is taking about 200,000 square feet of office space, along with some retail at the base of the building. SL Green has yet to secure an anchor tenant for the 1.6-million-square-foot building.

At a CBRE third-quarter market report lunch last week, Peter Turchin, who heads the brokerage’s team marketing the building, remained bullish that One Vanderbilt would have a substantial impact on Manhattan. He added that the building would become the center of Midtown, adding some might believe that might currently be the Chrysler Building or Rockefeller Center.

“What SL Green has set out to do is build the iconic building for Midtown,” Turchin said at the event, hosted at 4 World Trade Center last Thursday. “The building that’s going to reestablish Midtown as a premier office business district.”

When One Vanderbilt is completed, it will be about 50 feet taller than the Empire State Building Eight blocks to its south. The only taller commercial building in the city is 1 World Trade Center, which is 1,776 feet including its more than 200-foot spire.

The developer went through a lengthy rezoning process to get a special permit to build a denser building than current coding for the East Side of Midtown allowed. The City Council approved the permit in May 2015, as Commercial Observer reported at the time.

As part of the deal SL Green agreed to invest $220 million into the subway platforms and supporting infrastructure below Grand Central. The developer also transferred some air rights from its 110 East 42nd Street, across the street from One Vanderbilt.

That special permit paved the way for a broader rezoning of Vanderbilt Avenue, sitting to the east of Madison Avenue and runs between East 42nd and East 47th Streets, in which developers can build higher in exchange for investing in the subway system.

SL Green also secured a $1.5 billion loan to finance construction of the Kohn Pederson Fox-designed tower, as CO first reported in June. Wells Fargo, Bank of New York Mellon, J.P. Morgan Chase, TD Bank and Bank of China are among the lenders on the project.

“One Vanderbilt will be a high-performing addition to the Manhattan skyline serving as a blueprint for 21st century commercial development,” Marc Holliday, the chief executive officer of SL Green, said in a press release for today’s groundbreaking. “As the largest commercial property owner in New York, we are proud to partner with the city to create a model for unsubsidized development that drives our economy and makes a critical contribution to its infrastructure.”