SL Green Lines Up Five Banks for $1.5B One Vanderbilt Loan 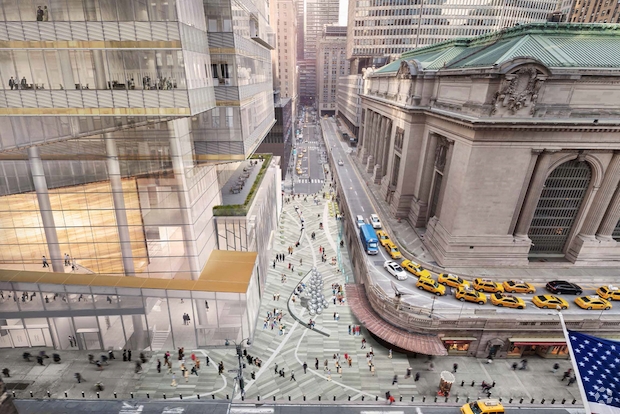 A rendering of One Vanderbilt, which will sit across from Grand Central Terminal (Courtesy: CoStar Group). danibalbi

SL Green Realty Corp. has lined up Bank of China, Bank of New York Mellon, J.P. Morgan Chase, TD Bank and Wells Fargo to provide a $1.5 billion construction loan for One Vanderbilt—Grand Central Terminal’s soon-to-be neighbor. The consortium of banks will act as co-leads on the deal, multiple sources have told Commercial Observer on the condition of anonymity.

While it’s not a done-deal and the loan structure has yet to be finalized, the mortgage is expected to carry a five-year term, one of the sources told CO. The financing is expected to close by the end of summer and there will be a formal groundbreaking in the fall, SL Green has previously stated.

Once the building is completed in 2020, the Kohn Pedersen Fox-designed One Vanderbilt will stand at 1,401 feet with 58 stories, making it about 50 feet taller than the Empire State Building. The project is expected to cost a total of $3.14 billion. Tishman Construction, a subsidiary of Los Angeles-based AECOM, has been tapped to manage the building of the skyscraper.

Demolition is already underway on the pre-war buildings that sit on the block-wide site, which is bounded by East 42nd and East 43rd Streets and Madison and Vanderbilt Avenues.

“There is an intense amount of scrutiny for this one investment and understandably, because it’s a large development but, I would say to you that this is going to be the premier project, probably in the city, maybe the world, when this is completed,” the company’s chief executive officer Marc Holliday said on the 2016 first-quarter earnings call. “That’s how we feel about this project, and that’s the kind of feedback we’ve got in from every single player we have presented this to.”

Indeed, arranging both the permitting and funding for massive project has been complex. As part of receiving an increased floor area ratio for the building, SL Green had to invest $220 million into the Lexington Avenue subway below the development site, and transfer air rights from the former Bowery Savings Bank building one block down East 42nd Street. Of course, the rezoning did not go down without a lawsuit—last year, Grand Central’s owner Andrew Penson filed a $1.1 billion lawsuit against both SL Green and the city of New York over the rezoning of the Vanderbilt Corridor without the purchase of Grand Central rights.

Additionally, SL Green plans on bringing a joint-venture partner into the deal, as has been widely reported. At NAREIT’s REITWeek 2016 Investor Forum earlier this month, executives from the New York City-based company explained that selling a 50 percent stake in the project would cover about $820 million in needed equity, as The Real Deal reported at the time.

TD Bank, one of the lenders in the syndicate, pre-leased 200,000 square feet of the 1.7 million-square-foot development in 2014. Beyond that lease, SL Green—which holds interests in 152 Manhattan buildings totaling 52.6 million square feet—has yet to sign on any other tenants. In a recent interview with CO, Steven Durels, an executive vice president and the director of leasing and real property at the REIT, said that roughly 90 percent of prospective tenants are financial services companies, and a few law firms and a couple of large, mature technology firms have shown interest. Asking rents are expected to be on par with the General Motors Building and the Seagram Building, he said. Current asking rents at the Seagram Building at 375 Park Avenue range from $170 to $180, as CO reported last week.

While a spokeswoman for SL Green declined to comment for this story, the real estate investment trust’s president, Andrew Mathias, previously told CO that One Vanderbilt “will be the most significant development in Midtown Manhattan in last 40 years or so.”

The entirely bank-led deal comes at a time when borrowers have increasingly turned to non-bank lenders for construction debt. The High Volatility Commercial Real Estate (HCVRE) regulation has constrained larger banks’ lending ability on development financing because greater capital requirements are required of the borrower—and there has been a recent debate over whether or not the appreciated value of land can serve as part of that capital contribution as opposed to only the purchase price. The way the rule is currently enforced is especially controversial in a market like New York City, where a borrower could have purchased a piece of land 10 years ago, but can only use the actual cost of the land towards its required capital contribution to receive a construction loan instead of being able to use what the value of the land is today.

The financing will even eclipse the $1.4 billion in debt that SL Green landed for the acquisition of 11 Madison Avenue in September 2015. Deutsche Bank originated the deal, which was securitized in the commercial mortgage-backed securities market across several conduits. The $1.5 billion construction financing for One Vanderbilt may also be one of the largest debt deals closed in 2016 so far, slightly more than the $1.2 billion loan AIG and Morgan Stanley provided to RXR Realty for the purchase of 1285 Avenue of the Americas, as CO first reported.

Representatives for Bank of China, BNY, J.P. Morgan and Wells Fargo declined to comment. A representative for TD could not immediately be reached.