The Flatiron District has long been known as a retail-entertainment hub in Manhattan.

But with an influx of office tenants primarily focused on technology, largely because of Google’s nearby Chelsea headquarters, things have changed. Now the Flatiron is quickly becoming a tech hotspot in the city and is home to several significant firms. Among some of the companies who have signed notable leases in the area over the last few years is Dropbox, which tripled its Flatiron office space, as well as plenty of startup firms, such as SevenFifty Technologies, that are making headway into the neighborhood.

Thanks to more of these thriving businesses and apartment/condo complexes in the area, the Flatiron is also becoming one of the latest 24-hour environments in the borough. As opposed to generations of commuters from residential mainstays such as Long Island, the Upper East Side, New Jersey and other locales, the millennial workforce is not as interested in commuting and wants to live near where they work.

The Flatiron 23rd Street Partnership, an area business association, said this has helped make the area’s office environment thrive. Second quarter vacancies for the sector were at 5.6 percent, lower than Manhattan’s overall average of 7.9 percent. The organization’s rent growth has been steady in the area. Building sales and major lease transactions are also robust. 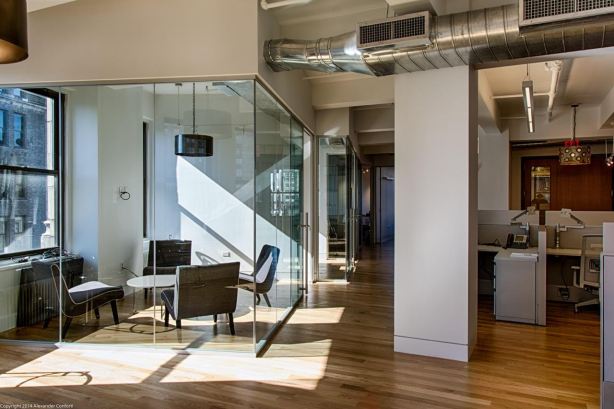 An office building, 915 Broadway, which ABS Partners Real Estate is marketing in the area, is an example. The asset, built in the 1920s, is currently 100 percent leased, but two floors, the seventh and eighth, will be available in October, and each have a floorplan of 13,387 square feet.

Though the 250,000-square-foot, 20-story building has been around for nearly a century, the changes that have been made there are indicative of how the neighborhood has evolved. For example, since a lot of the tenants flocking to the neighborhood are technology based, it has been important for the firm to wire the building with fiber optic cables to give tenants the highest level of Internet connectivity.

“We’re almost at the level of the Google building for this undertaking,” remarked Alex Kaskel, an ABS director. “We cater to the 21st Century tech tenant.”

What Kaskel and the 915 Broadway team, which also includes Carol Sacks and Jay Caseley, have found is that a lot of tenants are looking to locate in buildings around the area to be close to Google’s headquarters in order to do business with the tech giant.

One way that ABS executives have been able to cater to tech-based tenants, as well as brokers, is to create customized-built space that fits their specific needs.

In addition to the office component, upscale furniture chain Ethan Allen has opened an 8,000-square-foot flagship location on the ground floor, which shows that there is a demand for these types of goods in the area for the increased residential population, flocking to such buildings as 10 Madison and 1 Madison.

People are no longer satisfied with living on the Upper East Side and commuting to work and social activities when it can all be found within walking distance, pointed out Ryan Serhant, a residential broker who heads The Serhant Team of Nest Seekers International.

“Flatiron is one of the fastest growing neighborhoods for residential use in the city. The reinvention of Madison Square Park and the edition of Eataly completely changed the game,” he said. “All of a sudden Flatiron has gone from just a ‘great central location’ to an area that wealthy families want to live in.”

Serhant also mentioned that the many well-known restaurants in the area provide a draw as well.

James Caseley, an executive managing director and partner at ABS, has worked on 915 Broadway since 2007 and seen the Flatiron change a lot over the years. What he calls “the Google effect” has shaped the increased incomes by residents, which in turn has made tenants more discerning about the quality of the building. That led ABS to spend $2 million on renovating the lobbies at the building, making it palatable for tech-based tenants such as General Assembly and Union Square Ventures.

The changes in the neighborhood have certainly helped make it more attractive to tenants.

“The residential demographic, and increased household income, has caused an uptick in retail services and food services,” Caseley said. “The entire area is more attractive on a 24/7 basis.”