RXR Nails Down $1.2B in Financing for Massive NYC Office Building Sale [Updated] 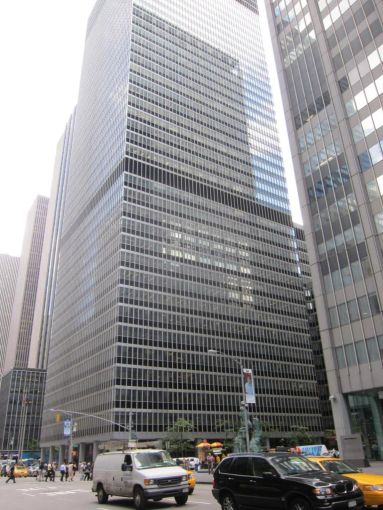 A partnership between RXR Realty and real estate investor David Werner used $1.2 billion in financing from AIG and Morgan Stanley to fund the much-awaited $1.65 billion purchase of the 42-story office tower at 1285 Avenue of the Americas in Midtown earlier today, sources have told Commercial Observer.

AXA Financial and J.P. Morgan Asset Management sold the property, which sits between West 51st and West 52nd Streets and is also referred to as the Equitable Building, in what is one of New York City’s biggest office sales of the year, as Crain’s New York Business first reported.

The seven-year financing consisted of a $1.025 billion senior loan—the two lenders split down the middle—and $175 million in mezzanine debt exclusively from Morgan Stanley, Michael Maturo, the president and the chief financial officer of RXR said. The debt does not carry an extension option.

As part of the deal, UBS renewed its lease for approximately 900,000 square feet at the 1.7-million-square-foot tower, Mr. Maturo confirmed.

“Overall, this was a very large, complicated deal where we had to restructure, extend and amend the UBS lease,” he noted. “Morgan Stanley and AIG did a terrific job working through the complexities of getting comfortable with the UBS extension.”

Eastdil Secured‘s Douglas Harmon and Adam Spies brokered the sale on behalf of the sellers and buyers.

“Meridian is both humbled and incredibly proud to have represented RXR Realty and David Werner in negotiating the financing for this monumental transaction,” Mr. Gervis said in prepared remarks.

The deal is the largest that both RXR and Meridian have ever closed.

CO first reported that AXA Financial, the American arm of French investment banking firm AXA, listed 1285 Avenue of the Americas for sale in August of last year. Simultaneously, the company put an adjacent 54-story building at 787 Seventh Avenue on the market and both properties were estimated to be worth a total of $4 billion. In January, California pension fund CalPERS scooped up 787 Seventh Avenue for $1.93 billion, city records show, and used a $780 million mortgage from Deutsche Bank to fund the acquisition, CO reported at the time.

A representative of AIG said he would not be available to comment until Monday. An executive for Morgan Stanley did not immediately reply to a press inquiry, and nor did Messrs. Harmon and Spies.

Updated: This story has been edited to reflect that Meridian Capital Group brokered the debt on behalf of RXR and that the $1.65 billion sale of 1285 Avenue of the Americas is one of the largest office transactions in New York City this year, rather than the largest.