Burger & Lobster Fills the Belly of One Bryant Park 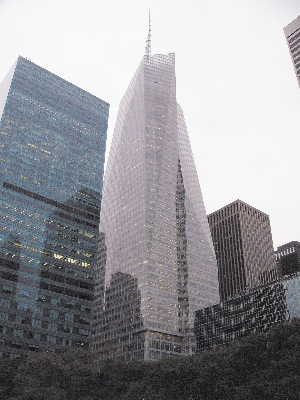 One Bryant Park is now one full building.

Landlord Durst Organization announced that it signed Burger & Lobster to 8,900 square feet on three levels of the 51-story skyscraper between Avenue of the Americas and Broadway, according to a press release. This will be the second location in New York City for the London-based eatery when it opens this fall.

Burger & Lobster will have 150 seats at the 2.3-million-square-foot One Bryant Park, which has an official address of 123 West 43rd Street. The 15-year deal makes the nearly seven-year-old building completely leased, according to Durst. Asking rent in the deal was $1 million per year, according to The New York Post, which first reported news of the lease.

“It’s very exciting for us to open our second New York City—and U.S.—location in such a vibrant neighborhood, where we’re taking advantage of a truly unique space that has inspired a very compelling  design,” Vladimir Borodin, the operating partner of Burger & Lobster, said in prepared remarks.

The restaurant’s menu is pretty true to its name: one can order a hamburger, whole lobster or a lobster roll with fries and a salad for $20. Its other stateside location is in the Flatiron District at 39 West 19th Street between Avenue of the Americas and Fifth Avenue.

At One Bryant Park, Burger & Lobster will be in the basement and on the ground and second floors of the Stephen Sondheim Theatre, which was rebuilt during the construction of the 1,200-foot abutting office tower, per the landlord.

“We are delighted Burger & Lobster chose One Bryant Park for its second location in the United States,” Jonathan “Jody” Durst, the president of Durst Organization, said in a statement. “The historical theater space will offer Burger & Lobster’s customers a unique dining experience in Midtown Manhattan.”