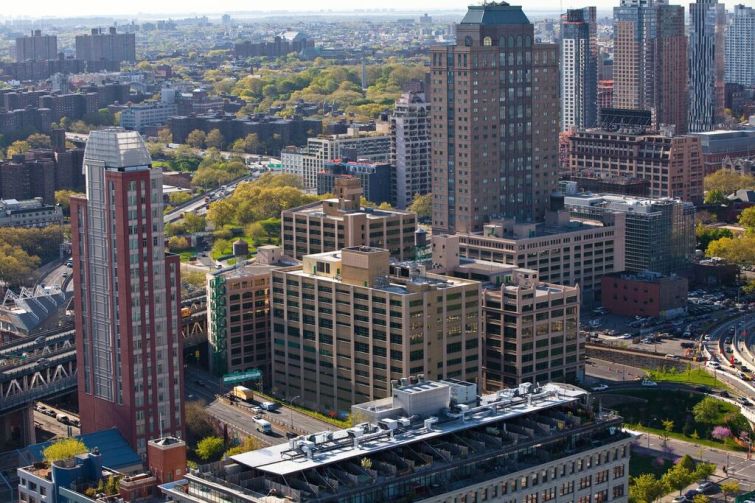 Two retail tenants have signed on at the Dumbo Heights campus along the Brooklyn waterfront, Commercial Observer has learned, and the campus also got a new marketing team.

Yoga Vida signed a deal for 5,500 square feet of retail space at 55 Prospect Street between Pearl and Adams Streets, according to a press release from Kushner Companies provided to CO, which owns the five-building complex with LIVWRK and RFR Realty (Disclosure: Kushner Companies Chief Executive Officer Jared Kushner owns Observer Media, publisher of CO). The yoga studio is taking 3,500 square feet on the ground floor and another 2,000 square feet in the basement.

The landlords also signed a 2,300-square-foot deal with Glaze Teriyaki at 117 Adams Street between Sands and Prospect Streets. The Seattle-style teriyaki eatery currently has two Midtown locations, another near Union Square and a fourth slated for the Williamsburg section of Brooklyn, according to its website.

Both leases are for 15 years, according to the release. A Kushner Companies spokesman didn’t immediately provide the asking rent in either deal.

Yoga Vida and Glaze Teriyaki will be joining the likes of Bluestone Lane Coffee, Dig Inn and Row House at the retail portions of the building. On the office front, WeWork, Etsy, Frog Design and Alexis Bittar have signed leases at the campus, which was formerly a pamphlet manufacturing center for the Jehovah’s Witnesses.

The new owners have been converting the building to attract the innovation economy tenants. Part of that effort includes designating space at 55 Prospect Street for short-term tenants that accommodate companies’ flexibility as they contract and expand, as CO reported in October.

Kushner Companies has tapped Sacha Zarba, Jeffrey Fischer and Zak Snider of CBRE to market the remaining 350,000 square feet of office space available for lease at the 1.2-million-square-foot complex, according to the release, and RKF is marketing the retail portion of the complex. A big portion of that is at 175 Pearl Street between High and Sands Streets, which has a 275,000-square-foot loft-style space looking out at the Brooklyn Bridge and Lower Manhattan. “The complex contains cool retail including a beer hall, a communal rooftop lounge, incredible views and terrific access to transportation—all the key ingredients companies are looking for in Dumbo,” Mr. Zarba said in a statement.

Until this point, the buildings have not been represented by an outside brokerage.

“All you need to do is look at our expanding tenant list and it’s clear: Dumbo Heights has become the place to be for New York City’s leading innovation economy companies,” Mr. Kushner said in prepared remarks of bringing on CBRE to market the 175 Pearl Street space. “Now there’s an incredible opportunity for a business that not only wants to be at the heart of the action at Dumbo Heights, but to put its stamp squarely on it.”