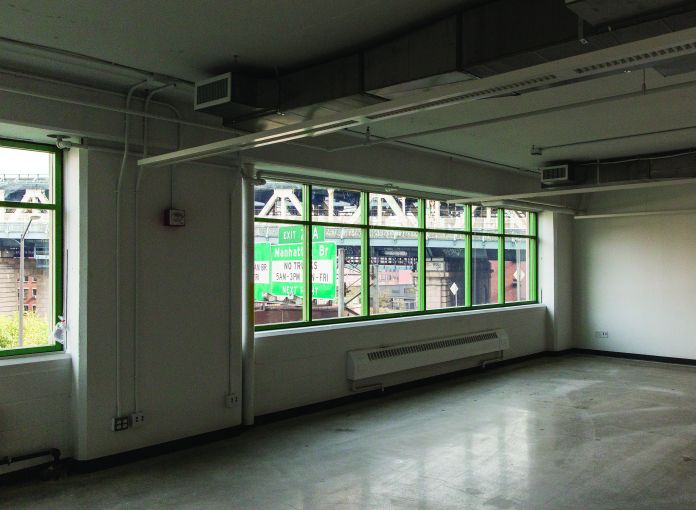 Offices in the Smart Space program have views of the Manhattan and Brooklyn bridges, as well as Downtown (Photo: Sasha Maslov for Commercial Observer). tcullen2015

On the second floor of 55 Prospect Street, Asher Abehsera looked out at the Brooklyn Bridge. Behind the landmark was the bright, shining skyline with 1 World Trade Center and 180 Maiden Lane in the background.

The space is currently empty, but he and his partners are hoping to fill it with a creative industry tenant looking for a short-term lease. With a view like that, he remarked: “Who wouldn’t want to work here? I think the most important thing is about being inspired. You can put out creativity with the feeling here.”

Many of these companies, however, go through different life stages. The number of employees increases, and the needs of an office change over time. So the landlords are employing the Smart Space program, which offers prebuilt private offices ranging from 800 to 6,000 square feet on three floors of 55 Prospect Street. On the fourth floor, for instance, a 5,000-square-foot potential office sits across the hall from a 1,800-square-foot space. All inclusive prices range from $3,600 to $31,000 per month.

“What we noticed is we had early on a lot of success leasing to major companies,” Mr. Abehsera said. “But when you walk around and interact with the community, it’s a lot of smaller media companies, architects, design shops, programmers. People would come up to us and say, ‘Wow, I’d really love to experience and be a part of the campus.’ ”

How does Smart Space differ from WeWork or other coworking spaces that build private offices, though? Leases typically run longer, at one to two years. Shared workspaces typically have 30-day license agreements and a company cannot get more than 1,000 square feet, Mr. Abehsera said.

By making their leases only one or two years, a tenant doesn’t have to break, say, a traditional five-year agreement if the needs of the company change and space either has to shrink or expand.

“It offers flexibility because what we found in this creative, cultural ecosystem, companies grow healthily,” he said. “That means that you start at maybe 1,500 feet and then you want to grow. You’re not growing to 10,000 feet, but maybe growing to 3,000 [square feet] so you can grow into the suite next door.”

Of the 78,000 square feet allocated for Smart Space on the second through fourth floors of the 10-story building, nine suites have been leased—eating up roughly one third of the space.

Although offices are on different floors, the amenity spaces are inter-usable. Conference rooms range in size to fit anywhere from six to 30 people, with tables, chairs and massive flat-screen TVs. One wall in every conference room is glossy and can be used as a giant whiteboard in meetings.

Like everyone else, Smart Space tenants will have access to the building’s rooftop decks, from which you can see as far as New Jersey to the west and the furthest outreaches of Queens to the east.

There are pantries and kitchens, which usually have an entrance on either side and glass walls. As Mr. Abehsera rearranged some of the benches in the fourth-floor pantry, he noted that the design is supposed to be open and uncluttered.

Many of Smart Space’s furnishings were built locally, Mr. Abehsera said. That includes the accent walls in each conference room, which come from Flavor Paper nearby in Brooklyn Heights.

These aren’t your run-of-the-mill flower patterns and polka dots; one wall has an Andy Warhol work. And Mike D of the Beastie Boys designed a Brooklyn-themed toile wallpaper featuring Biggie Smalls, the Cyclone and the Brooklyn Bridge.

But heading down to the third floor, Mr. Abehsera said one of the most interesting pieces of wall art is the scratch-and-sniff wallpaper that Flavor Paper designed for a conference room. At first, you might be in disbelief. But, yes, we scratched. We sniffed. The wall actually smelled like bananas.

“I tell people about the scratch-and-sniff [wallpaper],” he said. “They think I’m messing with them.”

There’s definitely a millennial workplace ethos at play here; you can book a conference room through an app, which also lets tenants order food or drinks to be picked up or delivered to meetings.

‘Dumbo, Brooklyn generally, it’s a creative class. You have some companies that are never going to be going public. They’re just healthy. They have solid clients, and they’re going to continue to thrive. They want a really comfortable work environment.’—Asher Abehsera, LIVWRK

Although many of the new buildings are new, the history behind some of them dates back more than a century. Along with 55 Prospect Street, the portfolio included 77 Stands Street (where Etsy and Alexis Bittar are going), 81 Prospect Street (WeWork’s building), 175 Pearl Street and 117 Adams Street.

The Watch Tower Society decided to start selling off its Brooklyn properties more than a decade ago as it relocated its headquarters to Warwick in Orange County, N.Y. LIVWRK, Kushner Companies and RFR bought the buildings in 2013 for $375 million.

Standing in the lobby of 55 Prospect Street, Mr. Abehsera said the building is 90 percent finished and the last of the work—and there’s plenty of it—is strictly cosmetic at this point. The sidewalk, however, was still ripped up last week, with work being done as we walked into the building.

There are roughly 3.78 million square feet of office inventory in Dumbo, according to a Brooklyn report by CBRE. Dumbo Heights makes up roughly half of that, with 1.4 million square feet. The area also commands the highest average asking rents in the submarket, which is broken up into five districts. Dumbo’s average asking rent is $64.47 per square foot. That’s well above the second highest, Downtown Brooklyn, which had an average ask of  $43.33 per square foot.

But there are few options for Dumbo-based companies to move around, according to Mr. Abehsera. “It’s a very dense working population,” he said. “But it’s also very underserved at the same time.”

Mr. Abehsera said the goal is to have a mix of tenants from public companies like Etsy, whose space is still under construction, to the mid-range private companies that might be smaller, yet have a strong client base. Dumbo has emerged as a residential neighborhood, but the companies based in the waterfront enclave don’t have many options when it comes to office space.

“Dumbo, Brooklyn generally, it’s a creative class,” he said. “You have some companies that are never going to be going public. They’re just healthy. They have solid clients, and they’re going to continue to thrive. They want a really comfortable work environment.”