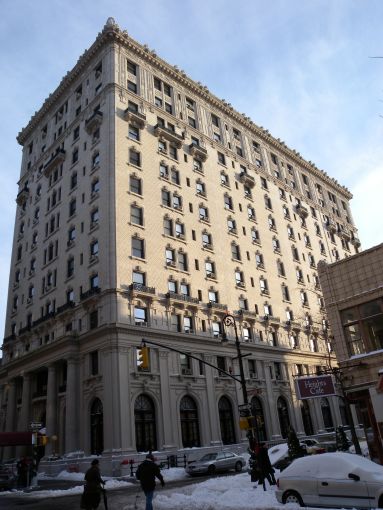 The Hotel Bossert in Brooklyn Heights is one of a slew of holdings in the borough that the Jehovah's Witnesses have sold off. abarbarinobserver

As the Jehovah’s Witnesses pack up their pamphlets and booklets for Upstate New York, they’re dumping any last remnants of its Brooklyn home.

For the longest time, the religious group was one of the biggest landlords in Brooklyn. That was until about 10 years ago, when the religion’s governing body, the Watchtower Tract and Bible Society of Pennsylvania, started dumping its holdings in the borough. It’s about to come to a head after the Associated Press reported that the organization is selling its headquarters at 25 Columbia Heights in the Brooklyn Heights section of the borough along with other pieces of its New York City portfolio. Business experts put the cost of the on-the-market buildings at $1 billion, the AP reported.

That would be a gigantic score for the Watch Tower society. The AP reported that the organization paid $3 million for its 733,000-square-foot headquarters in 1969. But in the last decade, the religious group has had other big scores in the borough. They’ve held some coveted pieces of land that look out at the Brooklyn and Manhattan Bridges, as well as other parts of the Brooklyn waterfront, that developers have rushed to snatch up.

Once dubbed the Waldorf Astoria of Brooklyn, the Hotel Bossert was leased by the Jehovah’s Witnesses since the 1983. The group bought the building five years later, and continued to use it for members for more than 20 years.

That was until David Bistricer and the Chetrit Group bought the 14-floor Brooklyn Heights building in 2012 for $81 million. The developers have planned to convert the structure, officially at 98 Montague Street, into a boutique hotel. As Commercial Observer reported in September, Fën Hoteles was tapped to operate the hotel, which could open some time this winter.

The Watch Tower society sold off in 2013 a five-building portfolio in the Dumbo section of Brooklyn. The structures, ranging from 50 years old to more than 100 years old, were formerly used to produce pamphlets and other materials distributed by the Jehovah’s Witnesses. LIVWRK, Kushner Companies and RFR Realty paid $375 million for the buildings, which have been renamed Dumbo Heights (Kushner Companies Chief Executive Officer Jared Kushner owns Observer Media, which publishes CO).

Since that time, the new landlords have converted the buildings—straddled between the Brooklyn and Manhattan bridges—from housing a single user to a campus for tech companies and creative types. E-commerce company Etsy is relocating one of its headquarters to the building. WeWork is opening two locations within the complex. And 78,000 square feet has been allocated as Smart Space, which offer short-term leases for creative companies, as CO reported in October.

While the Watch Tower society has benefited from buildings that were long fixtures in Brooklyn, the group has also profited from development sites in the blooming borough.

In April 2013, Urban Realty Partners and Megalith Capital bought three development lots in Dumbo for $30.6 million, as The Real Deal reported. In total, 200 Water Street, 173 and 177 Front Streets were 30,463 square feet, but the plots had the development potential for 150,000 square feet. While the Front Street parcels were empty, 200 Water Street featured a former Brillo factory.

It’s a different story two years later: 200 Water Street is being converted into a residential building with 15 condominium units, as Curbed reported earlier this year. Those condos should start at $2.8 million, the site reported.

Update: This story was edited to update the buyers of the three development sites.