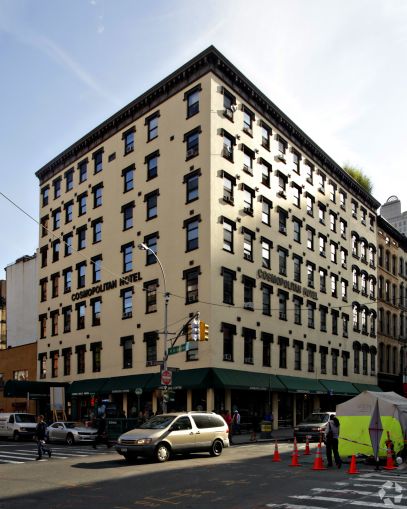 British fast-food chain Pret A Manger is bringing its organic coffee and prepared sandwiches to Tribeca.

The eatery has signed a 3,500-square-foot lease for a new eatery at the 184-room Cosmopolitan Hotel—Tribeca at 125 Chambers Street, RKF, which represented Pret A Manger in the deal, announced.

Its new location, which is expected to open early next year and will be the 42nd Manhattan Pret A Manger, will occupy 2,300 square feet on the ground floor and 1,200 square feet in the basement of the property between Church Street and West Broadway. The asking rent in the 10-year deal was $200 per square foot, according to CoStar.

Pret has been on an expansion kick in the city and specifically in Manhattan over the past couple of years. In 2011, there were just 24 locations, as Commercial Observer previously reported.

“In an effort to revitalize the hotel, ownership focused on identifying retailers that would service both the hotel guests, as well as local residents,” RKF’s David Abrams, who represented landlord Triumph Hotels in the deal, said via email. “We expect that Pret will nicely complement Starbucks and Serafina in providing a variety of dining options for guests.”

As CO previously reported, Serafina Restaurant Group signed a lease for the entire 5,400-square-foot building across the street from the new Pret at 113 Reade Street.

Pret signed an early renewal for its 3,120-square-foot store at 60 Broad Street between Beaver Street and Exchange Place, which was the first Pret A Manger to open in New York City, in 2001. Arthur Stern of Cogswell Realty, who represented landlord Piedmont Office Realty Trust, did not immediately return a request for comment.

Also, the company inked an early renewal and expansion of its store at 530 Seventh Avenue between West 38th and West 39th Streets. The location will grow by 1,300 square feet to a total of 2,866 square feet. The expansion is expected to be completed by January. Nicole Goetz and Brian Neugeboren represented landlord Savitt Partners in-house in the deal, but did not immediately return requests for comment.

Pret, headquartered in London, has more than 375 locations worldwide including major American cities such as Boston, Washington D.C. and Chicago.