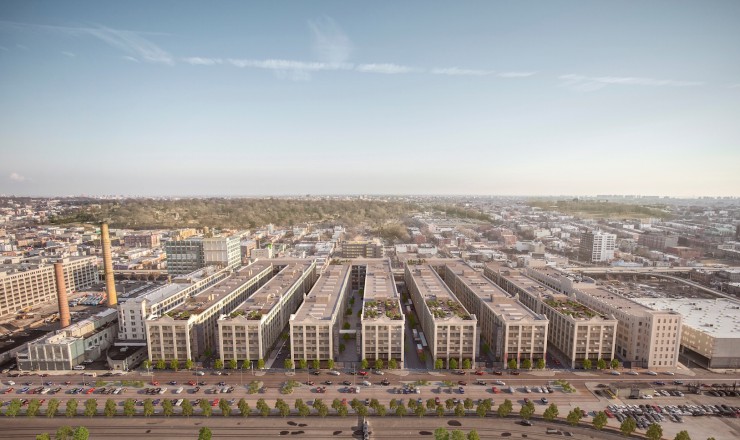 Sunset Park’s Industry City is about to get a lot more than just Brooklyn Flea and Smorgasburg this season.

Bank of China and SL Green Realty Corp. are lining up a $220 million loan to recapitalize existing debt on the massive redevelopment project, which boasts 6 million square feet of commercial space across 16 buildings, according to a person with intimate knowledge of the deal. The loan is slated to close in the next few weeks and the sponsors and lenders are in discussions about a “good news facility,” which would allow for additional funding on top of the $220 million, that person said on the condition of anonymity.

Bank of China will fund the senior portion of the financing and SL Green will provide the remainder in mezzanine debt. The specific breakdown of the debt was not disclosed.

The original borrower, a group of investors led by Rubin Schron of Cammeby’s International and Abraham Fruchthandler of FBE Limited, defaulted on the loan in January 2011 and the debt was later split into a $190 million A-note and a $110 million B-note in April 2012, according to commentary from the special servicer. The following year, a new borrower entity—with additional sponsorship from Jamestown Properties and Angelo, Gordon & Co.—assumed the loan and further modified it.

Since the new owners, which also include Belvedere Capital and Cammeby’s International, took over the former Bush Terminal in 2013, they have been in the process of redeveloping and leasing out the space to tenants in creative fields as part of a $1 billion plan.

The gigantic adaptive redevelopment project has no doubt made Sunset Park a destination for those in the manufacturing and TAMI (technology, advertising, media and information) industries. With its open spaces, high ceilings, big windows, natural light and new tenant base, Industry City has played a key role in the resurgence of old industrial centers in Brooklyn.

As part of Industry City’s revitalization, its owners plan to upgrade infrastructure, grow the retail and dining components and expand transportation options around the site. A 280,000-square-foot hotel is also in the works, as Commercial Observer previously reported.

Correction: An earlier version of this story stated that the new loan will total $320 million. The current loan amount is $220 million with the potential for additional funding. Commercial Observer regrets the error.