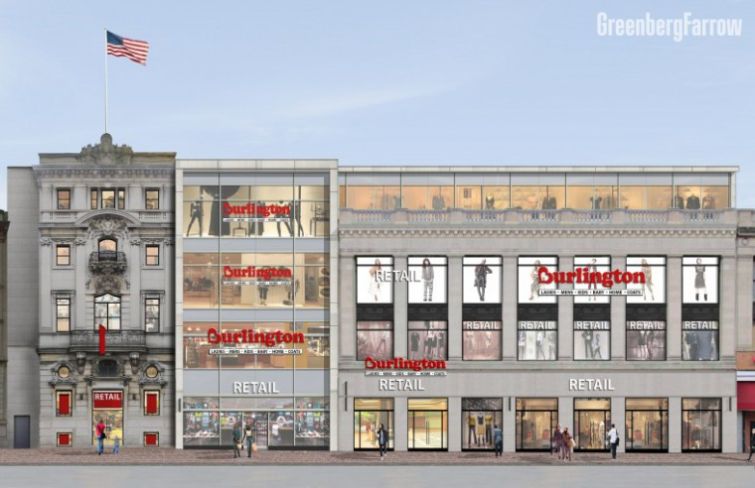 A RENDERING OF THE RETAIL CENTER THAT BURLINGTON COAT FACTORY WILL MOVE INTO.

Burlington will move into part of the second floor and the entire third and fourth floors of the four-story center in early 2017, after the project is completed in the fall of 2016, Albert Laboz, a principal at United American Land, told Commercial Observer.

The new location will mark Burlington’s third outlet in Queens. It has stores in Rego Park and Glen Oaks.

Mr. Laboz negotiated the deal on behalf of his company and CNS Real Estate’s Clifford Simon represented Burlington in the deal.

“Jamaica is a longtime retail shopping destination,” Mr. Simon said to CO. “It has very high foot traffic and there is fantastic public transportation. It met Burlington’s parameters that they were looking for.”

Under its construction plan, United is connecting the interior of the three buildings, but will keep the original facade of 160-08 Jamaica Avenue, and reduce the existing nine-story 160-16 Jamaica Avenue to four floors. The building at 161-02 Jamaica Avenue is landmarked. Architecture firm GreenbergFarrow designed the project.

Mr. Laboz said they have received interest from other fashion-related stores for space in the building. United is hoping to add four or five more tenants to the project.

“[Burlington’s lease] validates how strong this urban retail corridors is,” Mr. Laboz said. “I think it’s a catalyst. I know others will follow.”