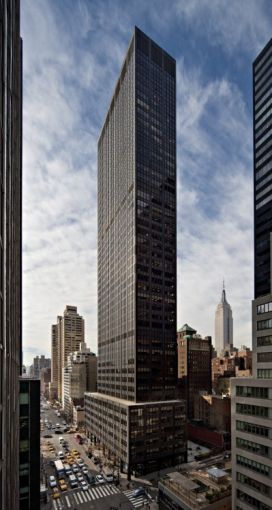 Kansas City, MO-based law firm Polsinelli PC has taken 40,592 square feet spread across three entire floors at the top of L&L Holding Company‘s 600 Third Avenue, and plans to move there from 900 Third Avenue by the end of the year, Commercial Observer has learned.

The new New York headquarters will be on the 40th through 42nd floors of the 42-story building between East 39th and East 40th Streets, according to L&L. The asking rent in the 10-year deal was $79 per square foot.

Polsinelli will be taking over space occupied by Sumitomo Corporation, the tower’s original developer, starting when the building opened in 1972. Sumitomo relocated from seven stories at 900 Third Avenue to two floors at 300 Madison Avenue.

Also at 600 Third Avenue, The Mission of Austria signed a five-year renewal for the entire 13,129-square-foot 31st floor.

The building at 600 Third Avenue is undergoing a $10 million redevelopment that includes a new lobby, entryway, elevators and public plaza. The work should be completed by the end of the year. The only space available for lease in the building is 6,177 square feet on the 28th floor, Mr. Wiener said.

“We’re certainly one of the hottest buildings in the Grand Central district right now,” Mr. Berkey said in prepared remarks. “The property has always competed well and has throughout our tenure been at or new full occupancy.”