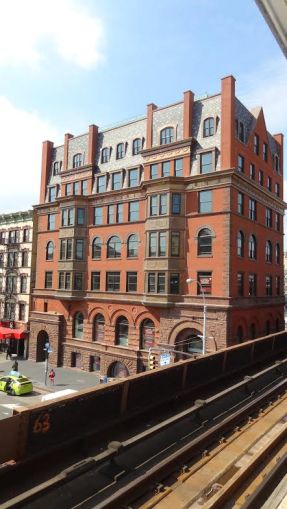 After four years, the Corn Exchange Building at 81 East 125th Street has made it through the maize (er, maze) of redevelopment and is ready for tenants.

A lot of the economic rebirth in Harlem has featured big-box stores like Whole Foods Market and Bed Bath & Beyond, both of which are slated to open up on 125th Street. But some architecture that predates even the days of Langston Hughes and Bumpy Johnson, until recently, had fallen to the wayside.

The 132-year-old Corn Exchange Building features 25,000 square feet of office space, but it won’t likely be filled by a bank, which was the original tenant of the Lamb & Rich-designed commercial space, or the commodities industry that made it famous.

Colliers International brokers marketing the building told Commercial Observer Artimus is looking for tenants working in technology or the non-profit fields (not a three-man operation, necessarily, but your Columbia University-type organization).

“The ownership would like to see the type of tenancies that are going to be creative to the neighborhood, create jobs and use amenities,” said Eric Yarbro, Collier’s specialist in Harlem, who is marketing the building with Reggie Wills, Drew O’Malley and JoAnn Stock. “125th Street is the gateway to Harlem. Your first impression is now going to be the Corn Exchange Building.”

But as recently as five years ago, Mr. Yarbro and the other brokers at Colliers might not have said that. The city’s Department of Buildings deemed the office building structurally unfit and ripped down everything but the first floor, which was landmarked, according to The Corn Exchange Building’s website.

Demolition was just the latest round for a building that was crumbling by that point for 40 years. Riders on the Metro North train could see trees growing out of some floors, Mr. Yarbro said, and neighborhood residents often wondered if anything was ever going to happen with it.

So the New York City Economic Development Corporation, which took over the dilapidated building in 2003, put out a request for redevelopment in 2011, the brokers said, to bring it back to its consolidation-era allure. The developer Artimus won the bid, and bought the property from EDC for $1.5 million, property records show.

The new owner had to preserve the bottom two floors, which are landmarked, while reconstructing the third through seventh floors. Mr. Yarbro said it wasn’t too big of a haul, but Artimus was obliged to make the building LEED-certified and add new heating and cooling systems neither of which were around when Chester A. Arthur was president.

“They obviously had to pick up some of the modern amenities that would make it LEED-certified,” Mr. Yarbro said.

Tenants using these amenities could either be in technology, education, the service industry or non-profits, the brokers said. That could even be a retailer looking to use the four floors of office space, along with the ground and second floors for a retail location. Lee & Associates is currently marketing the retail, which is 10,000 square feet across those floors and the basement. While the Colliers brokers said they’re not looking to take anyone’s business, they’ve explored doing a full lease of the seven-story structure.

Brokers said the landlord wants someone that isn’t going to be just viable tenants, but someone who can contribute to the history and existing communities in the neighborhood. Potential tenants would work with the area’s small businesses, they said, while spurring more local restaurants and services to open with more workers headed to the Corn Exchange Building.

“[Artimus] believes strongly in rebuilding in the community and strengthening the community,” Ms. Stock said. “Artemis has put a lot of care into [the Corn Exchange Building]. And they want to make sure the right tenant is in there.”