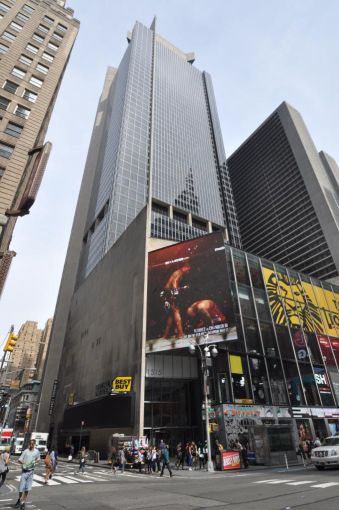 Swatch last Friday signed a 15-year lease for 2,113 square feet in SL Green Realty Corp. and SITQ’s 1515 Broadway with an asking rent of $2,400 per square foot, said Jeffrey Roseman at Newmark Grubb Knight Frank, who acted on behalf of the owners in the deal. Marc Leber of NGKF also worked on the transaction.

The multinational watch and jewelry company joins footwear company Skechers USA in the ground-floor space. In December, Skechers signed a 10-year lease with a five-year option for approximately 3,700 square feet, according to a press release from SL Green and Mr. Roseman.

There is no additional retail space in the 54-story building.

“Demand from retailers for space in and around Times Square continues unabated,” said Brett Herschenfeld, managing director, SL Green, in a statement. The 1.8-million-square foot 1515 Broadway is the headquarters for mass media company Viacom and the setting for one of the city’s largest lease deals ever: Viacom’s 1.6 million square feet, as reported by Commercial Observer.

SITQ is a subsidiary of the Caisse de depot et placement du Québec and along with SL Green bought the building in May 2002 for $484 million, a press release at the time indicated.

The building, which is between West 44th and West 45th Streets, underwent a $60 million renovation, completed in 2010 In 2011 two LED super signs were added to its façade to provide advertising opportunities, according to the building website.

“This is one of the most visible spaces in Times Square,” said Mr. Roseman. “It basically serves as the backdrop for Good Morning America every day.”

Haim Chera of Crown Realty represented Swatch. He could not be immediately reached for comment.