Grand Opening: Behind the Scenes of 4 WTC Debut 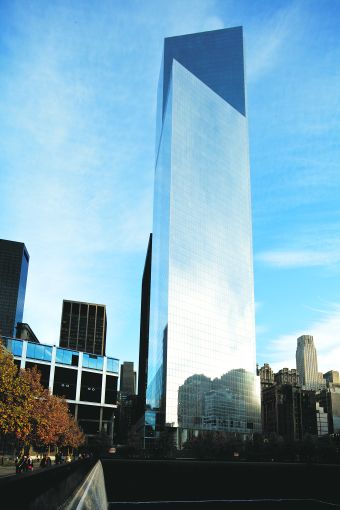 Less than two weeks after a celebratory ribbon-cutting ceremony held to mark the official opening of 4 World Trade Center, the scene at the building was comparatively muted. Instead of welcoming tenants and checking in guests, security officers manned their posts as construction workers put the finishing touches on the building’s lobby.

That’s all about to change.

Within 12 months, the Port Authority of New York and New Jersey and New York City, the two tenants that have committed to space at tower, will complete their respective build-outs and commence moving in. Other tenants, it is hoped, won’t be far behind.

“The fact that [4 World Trade Center] is open brings another level of reality to the project,” said Adam Foster, senior vice present at CBRE, who is part of the leasing team at the Silverstein Properties-owned building. “It demystifies everything.” After breaking ground in 2008, it took 1,200 construction workers some 3.2 million hours to erect the 977-tower. On November 12, 4 World Trade Center opened for business.

There were many who questioned whether it would ever get done. Larry Silverstein, who had acquired the leasehold on the World Trade Center just months before 9/11, spent years settling insurance disputes over the destroyed towers, calling into question more than once the viability of the project.

To say Mr. Silverstein feels a certain sense of vindication is an understatement.

“I just felt so deeply in my heart that it was essential to get the World Trade Center rebuilt; it needed so desperately to be done,” he said in an interview with The Commercial Observer. “I focused on this with enormous intensity and said from the very beginning that I was going to accomplish this. I put my head down and never listened to the naysayers.”

The first skyscraper to open at the site will almost certainly continue to be overshadowed by its high-profile neighbor, 1 World Trade Center, the Durst Organization-developed building that towers over lower Manhattan and has drawn publishing giant Condé Nast as a tenant. The significance of the opening at 4 World Trade, however, has not been lost on New Yorkers.

“The real story about this 72-story building that looks across at the Sept. 11 memorial’s south reflecting pool is that it is here, the way this part of the city is still here, people coming back down here to go to work,” Daily News columnist Mike Lupica wrote on the day of the skyscraper’s opening.

Now open, 4 World Trade Center has joined a burgeoning community in lower Manhattan that, against all odds, has thrived in post-9/11 New York.

“I think there was a concern in the period immediately after 9/11 that the amount of construction and the length it was going to take could have a negative effect on lower Manhattan in terms of businesses not being able to wait it out and the residential community not wanting to be here,” said Bill Bernstein, president of the Downtown Alliance. “We’ve seen just the opposite.”

The opening is the first step in a lengthy process by which the World Trade Center will integrate itself into the surrounding neighborhood, which looks little like it did in 2001. Pedestrians, many of them among lower Manhattan’s now 60,000 residents, who for more than a decade were separated from the site by fences, can now walk alongside the building.

The transformation of lower Manhattan, once a largely commercial district reliant on financial services, has been dramatic. Much of the neighborhood’s building stock, formerly home to stock brokerages and insurance companies, now houses many of the area’s 30,000 residential units.

“We are happy to see the streets open up to the rest of community,” Mr. Bernstein noted. “Being able to walk that stretch of Greenwich Street is a harbinger of the World Trade Center being open to the community again.”

So too has 4 World Trade Center’s opening drawn the attention of the nation’s most prominent architecture critics.

Setting aside the squabbles over the height of 1 World Trade Center in relation to the Willis Tower, Chicago Tribune critic Blair Kamin labeled the Fumihiko Maki-designed 4 World Trade as “subtle,” “self-effacing” and “appropriately dignified.”

Mr. Silverstein himself compared the impact of the rebuilt World Trade Center site favorably to that of the introduction of Rockefeller Center—a commercial complex built on a similar scale. He adds the important caveat that, unlike Rock Center, each building is to be designed by a different architect.

“It is something that will lend a much livelier scene; it makes for site and location that becomes really special, unlike anything we have in the city,” he said.