Office-to-Residential Conversions: What’s Not Being Discussed

For one thing, what if the office mounts a comeback? Really. 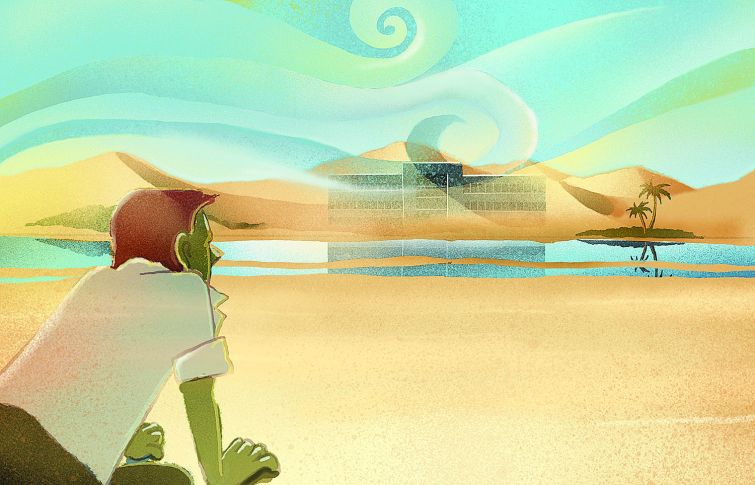 As any rabbi, imam or priest will tell you, conversion is not simple. Office owners know that too. Or they should.

The frenzy for office-to-residential conversions has turned adaptive reuse — as a potential messiah for both solving the housing crisis and tackling hybrid work’s effects on central business districts and municipal tax rolls — into a quasi-religious quest coast to coast. Article after article and analysis after analysis will suggest that the changeover is both inevitable and desirable.

Yet, while the widespread shift has been debated and gamed out, no one area or firm has acted on it on a large scale. Of the 78 office buildings sold in Manhattan since the dawn of the pandemic until November, for instance, only three were slated for residential conversions, according to Avison Young research.

For many analysts and developers attracted to the challenge of redevelopment, even the rosiest urbanist visions and idealism can’t reshape the physics of bloated office buildings and the hard math of conversions.

Then there’s the oft-overlooked fact that, as far as the office market has fallen in the age of hybrid work, buildings might still be more valuable as workplaces than apartments.

Even evangelists for such changes concede the market for such projects is limited.

Tracy Hadden Loh, a fellow at the Brookings Metro think tank, says that the case against these renovations is overstated. If the building is worth reusing – in her thinking – then proceed, or else demolish it and rebuild.

Loh estimates less than 10 percent of offices in major markets will be in locations suitable for conversions, even in the downtown core. Some sites identified for conversion are in fact irredeemably lost for any redevelopment purposes, what Loh called the “truly worthless, haunted houses of suburban office buildings.” But that small shift to residential may be enough. Look at Lower Manhattan, which, with the support of city and state incentives for office-to-residential conversions, saw the Financial District and other areas become live-work-play centers with the addition of roughly 10,000 new units in the decade following the terrorist attacks of September 2001.

“​​Basically, you can carve up an old building like a turkey, so long as it’s not a landmark or within a landmark district,” said Michael Cohen, principal of Williams Equities. “The ruminations on floor plates are overstated. That’s more of a money problem than a logistical problem.”

“We’re not at that point yet, where we’ve seen office values fall to a point where it makes the conversions a no-brainer,” said CBRE’s head of office research Jessica Morin.

Many reports and analysis have found the options truly are few and far between. A 2022 analysis of Denver’s 2-square-mile Central Business District by the advocacy group Up For Growth found that of the 208 office buildings in the area, just 6 percent were suitable for residential conversions. A December CBRE report looking at office conversions nationwide from 2016 to 2021 found that just 218 projects were completed. Last year’s 42 total projects surpassed the recent average, but just 17 percent of such projects were multifamily; nearly half were conversions into labs.

“The bottom line is, adaptive reuse is a very particular specialty within real estate,” said Brookings’ Loh. “And so some of the hullabaloo that’s going on right now is just that most people don’t know how to do this.”

On the surface, the shape of many office towers presents a pressing concern. Office buildings from the 1980s, when the nation financed a boom of postmodern towers with bulging floor plates and copious cubicles, aren’t old enough to qualify for historic tax credits, and face unwieldy, expensive reconstruction. Carving out apartments or condos where each bedroom has daylight means odd unit layouts and copious leftover interior volume. Developers can fill only so much of that leftover with amenity or storage space.

“The most stressed segment of the office market is buildings built in the 1980s,” said Craig Leibowitz, director of innovation and insight advisory at Avison Young. “You can’t compete on price with older, vintage assets, and can’t compete on quality or sustainability with newer assets.”

Certain markets, such as Cincinnati and Cleveland, which have much older office stock, have seen renovations take off due to special tax credits — in their cases, the Ohio Historic Preservation Tax Credits. Morin doesn’t have exact data on how many recent office conversions nationally took advantage of historic tax credit funding, but she says there’s clearly a pattern, and clusters of projects appear where the credit is available.

Even if the building stock under consideration is of suitable vintage for easier residential conversion, the math might still be brutal.

James Nelson, an Avison Young principal and head of its New York tri-state investment sales practice, provided a rough, back-of-the-napkin calculation. Say an office cost $400 a square foot to acquire, with an additional $400 a square foot for hard and soft renovation costs. That totals $800 a square foot, but then you remember not every square foot can be turned into rentable residential space, so you’re likely looking at $1,000 net a square foot in total spend. Average rent may be $90 net a square foot, with $27 in real estate taxes and $10 in operating expenses, leaving a net operating income per square foot of $53. That adds up to just a 5.3 percent return, which leaves little room for error.

Anoop Dave, CEO of Victrix, which has more than 1 million square feet under development, including a Macy’s headquarters in Cincinnati, said that at prices over $65 per square foot most buildings in secondary markets don’t work. The process can get so complicated that “some are only teardowns, even if given for free.”

Conversions also have to consider if the new use has enough profit, or the new buyer is willing to pay enough, to cover the existing mortgage. Existing owners, who may have been aggressive with financing or maximizing their proceeds, may not be able to afford the transition, said Cohen.  “Maybe you postpone until the interest rate environment is better,” he said. “Or maybe it means you’re trapped between a rock and a hard place.”

There’s also the challenge of possession, and getting rid of existing tenants, which can take years. Cohen compared it to putting together an assemblage of property parcels to build a large project. Right now, he said landlords everywhere are figuring out that break point when all their tenants may be gone, and planning around it.

Meanwhile, developers and investors have been waiting for the public sector to provide plans, policies and support to incentivize conversion. Some governments have responded, cutting regulations and speeding up approvals. California included $400 million in incentives for commercial-to-residential conversions in its latest budget. At the federal level, the proposed Revitalizing Downtowns Act, sponsored by Sen. Debbie Stabenow of Michigan, would offer a 20 percent tax credit for conversions. Many in New York, for example, are looking for a return of both 421g, a program that helped build residential projects in Lower Manhattan, and some version of 421a, a tax abatement that incentivized new residential projects and that expired in June 2022.

Some of the proposals on the table in New York City, highlighted in a recently released study, include zoning reforms that would make residential conversion by-right, automating the process and avoiding regulatory battles. In addition, changing the definition of “historical” to anything built on or before 1990 would help ’80s towers in limbo.

Avison Young’s Leibowitz argues that the biggest challenge is tax abatement. As his example above shows, it’s a big cost factor for developers.

Then again, tax abatements may muddle the case for public incentives, since one of the reasons being advanced to convert these buildings is that empty offices won’t generate as much tax revenue. And, as Loh argues, if cities start partially footing the bill, public interests and objectives, such as the production of affordable housing and placemaking, needs to be foregrounded. Condos may make more financial sense but don’t alleviate housing affordability issues. “This is the business of commercial real estate investors, and they need to take care of their business and solve their own problems,” she said.

If those aren’t enough hurdles, there’s always inaction. It may simply make sense for many office owners to try and wait out the downturn, delaying action and holding on to old property — despite forecasts of a long-term shift in office usage and demand.

“They may be holding on for the next generation; they paid their mortgage and are just hanging on to whatever income they can,” said Anita Kramer, a senior vice president at the Urban Land Institute. “In older areas, the vogue for renovation is relatively new.”

Still, an opportunity looms for developers, despite the challenges, due to the scale of vacant office space. These deals can be great wins for cities, the environment and investors, said Victrix’s Dave, but they aren’t for the inexperienced or faint of heart.

“They require lots of focus and experience,” said Dave. “In my career, I have bought five buildings from people who initially outbid me and had to sell the property after they realized the development would be much harder than they had anticipated.”

For more articles like this, consider subscribing to Commercial Observer’s Tenant Talk newsletter.