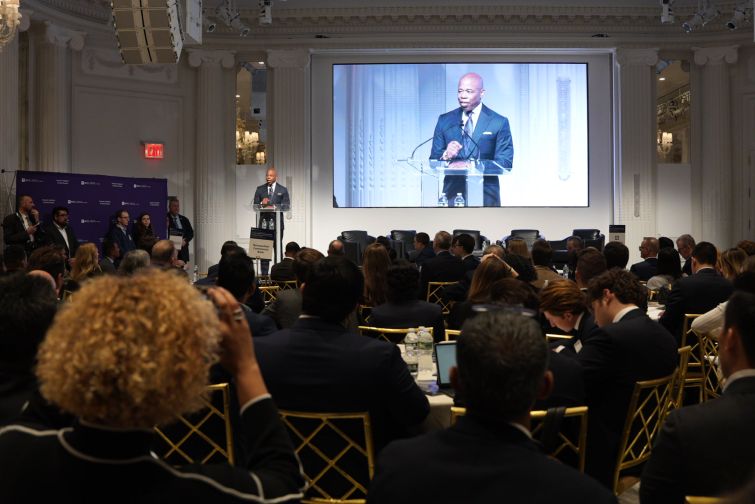 There are people who have confidence in New York City’s real estate market even on its most volatile days. Mayor Eric Adams and Larry Silverstein are two of them, evident in the opinions they expressed at the New York University Schack Institute of Real Estate’s Capital Markets Conference this week.

Over 700 people came to the conference — held at The Pierre Hotel in Manhattan— including over 150 students from NYU.

“We’re being very deliberate about who the speakers are,” Marc Norman, the newly appointed associate dean of the Schack Institute of Real Estate, told CO, adding that  “there are many people that have a leg up [in the industry] because they have a family legacy, but for all of those people that don’t have the network, I feel like conferences like this are important.” For that very reason, the program added a networking session in addition to the panel sessions to allow attendees the chance to mingle.

After panel sessions in the morning, Mayor Eric Adams kicked off the afternoon program as the featured speaker. He had just traveled from Qatar where he watched the  World Cup, and his remarks focused on the post-pandemic economic outlook for the Big Apple. Projecting an optimistic view, Adams discussed the ongoing and upcoming development projects around the city and noted that the city belongs to every New Yorker.

He encourages everyone to think differently about housing and explore what the globe has to offer.

“From Qatar to Greece, all these countries are trying things differently. Let’s be different, let’s be pioneers, and this city will be the safest and cleanest city in America,” Adams said.

Adams then passed the remarks baton to Larry Silverstein, chairman of Silverstein Properties and the founder and chairman emeritus of the NYU School of Professional Studies Schack Institute of Real Estate Advisory Board. For someone who spent the last 21 years rebuilding the office component of the World Trade Center site, Silverstein sees the major change going on in the office sector as an opportunity.

“There isn’t an office building left on the south side of the Wall Street that hasn’t been converted to residential, so there are opportunities all over, and all I can say to you is ‘seize the opportunities’ because there’s no end to what you can accomplish as a result in this incredible city of New York,” he said.